Thanks for all the kind comments regarding Chris and I’s four year anniversary! I know I didn’t really talk about it much beforehand, but it’s really not that big of a deal for us. Chris and I like to keep the cheesiness to a minimum in our relationship. In fact, I’ve told him several times that I will break up with him if he ever writes me a poem or anything else equally as lame. But we’re also not ones to turn down an excuse to go out for a good meal ;) If you’re curious about how we met, etc , I wrote about it in a previous post here.

Despite only sleeping a measly six hours last night, I at least finally discovered a place in my apartment that takes decent photos in the dark mornings.

Much better than spooky oats ;) 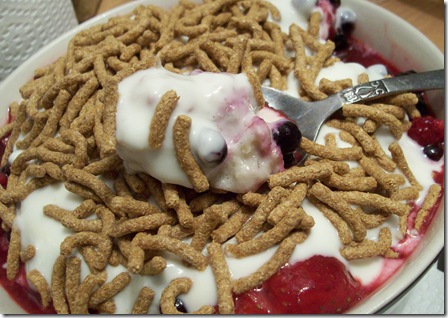 AKA an Oatmeal & Yogurt Parfait. Haven’t had this since berries went out of season! Not as good with the frozen stuff, but still tasty. This bowl will always hold a special place in my heart as it’s what I ate almost every. single. day. while I was losing weight.

My hunger is still off the charts today. I was digging around my kitchen for my morning snack mega early. Had another old favourite.

Sure enough, I was looking for lunch early too! This is the exact same “boring” lunch I had yesterday. Luckily, boring is often delicious ;)

Fontaine tofu spread, tomatoes, mushrooms, onions, bell pepper, romaine. When me and homemade applesauce get married, I want tofu spread to be my maid of honour :P Unpictured is the honeycrisp that rounded the meal out.

My day was spent running errands and “catching up” on aspects of my life that get neglected on work days. Dinner was “thrown together.” Literally. Usually there are two ways I throw together a meal. Put a bunch of ingredients in a pan and sauté it, or put them on a baking sheet and roast it. Tonight’s was the latter. 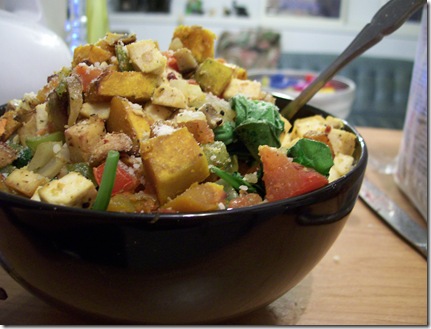 I tossed everything, minus the spinach, in a big bowl with a little olive oil, pepper, parmesan cheese and this stuff: 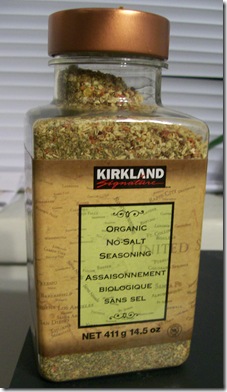 My mom insisted I buy this Kirkland organic no-salt seasoning when she took me to Costco. I know better than to go against my mother’s wishes.

Then I let everything roast up at 425 F for about 20 minutes, then at 350 F after adding the spinach for an additional 5 minutes.

The one bad thing about “throwing things together” is that I just keep chopping new things up and adding them to the mix. This turned out to be so much food! I ate maybe 2/3 of it then claimed defeat. The tofu in that seasoning was delicious, but I oddly did not care for the squash. Too dry and bland.

I decided to make today a rest day after my 8 mile run yesterday. My old lady hips were a little cranky with me after forcing them on a long run the day after I put them through multiple weighted squats at the gym. Thankfully, they’re in a much better mood now :)

Just finished up an hour long living room yoga session. Yoga class was cancelled tonight. Boo. I tried out a Dave Farmar power vinyasa podcast. It was alright. I did 30 minutes until I called it quits. I can only go up and down so many times until I get annoyed! :P I did work up a nice little sweat though. Finished it off with some balance yoga from Yoga Today. I really dig the balance poses because I’m actually good at them! I could hang out in tree or dancer all day :)

I also want to let you guys know that I’ll be counting my calories for the next few days. I haven’t done this in seven months! I know a lot of people hate calorie counting because of the obsessing and analyzing that often goes with. But it’s never been like that for me. Calorie counting was like a slap upside the head for me when I started losing weight. I didn’t have a sweet clue what calories were, or what their effects were. That’s not to say I didn’t struggle with calorie counting at times, but overall, it was just a really useful weight loss tool for me.

Anyways, I just feel like it’s time to check-in and make sure I’m still on-track. I haven’t gained any weight, nor do I want to lose any more weight. But I have not been feeling as content as I’d like to be about my food choices lately. When I moved into weight maintenance, I wanted to make sure there were no “off-limit” foods, which there were plenty of while I was losing weight. But I just feel lately, I’ve been using that as an excuse to eat more processed foods, especially sugar. So I want to take a few days to reflect on my food and really just bring it back to basics. I want to feel confident about my food choices again, and not like I’m derailing a bit. I’ll keep you updated on how my “check-in” is going :)

Question of the Day: What are your feelings on calorie counting? Like I said, I think it’s a really effective tool for weight loss. But I also don’t think it has much of a place in weight maintenance, unless you need it to achieve fitness goals (ie to ensure you’re eating properly during marathon training). With that said, I know from my own personal history that bad eating is a long and slippery slope for me. Hopefully stepping back and taking a look at my food choices will again raise awareness of what I’m putting in my body and get me feeling good about it again :)