Happy, um, Thursday? Unless you are reading this on Friday – then T-G-I-freakin-F!!

Loved reading the types of foods y’all could never get sick of. Seems like it’s the same things for a lot of us – oats, nut butter, cereal, yogurt, etc. The staples in any diet really, especially if you eat them all together ;)

It was hovering around 1 C this morning. I’m too lazy to Google what that is in Fahrenheit, but just know that’s reallyreally cold! I made a big ‘ole bowl of oats to warm my insides.

I “sandwiched” half the jam and PB in the centre of the bowl again. So sometimes I’d get surprise spoonfuls of PB&J. So fun!

I’d just barely digested this monstrosity by the time I went to BodyPump class two hours later. It at least gave me lots of pumpin’ energy!

This was my first ever “weight lifting class.” I was equally excited and scared, with a little bit of cluelessness. Thankfully, a nice lady in the class helped me pick out appropriate weights and set up my “station.” I knew sort of what to expect going in based on the Typical Class outline online:

I was still feeling good after, so I did 15 minutes HIIT on the elliptical. Then I called it a day.

I’m not a huge fan of low weights/high reps, I usually do the opposite. Not sure if the class will make it into my regular rotation, but I will definitely use it to switch up my lifting routine once in a while! Gotta keep those muscles guessing ;)

My body was feeling mega empty when I got home, so I pounded back a little protein juice to get me through till lunch.

Appetizing photo :P About a cup of unsweetened vanilla almond milk and a small scoop of chocolate whey powder.

45 minutes later I had a very satisfying lunch full of things I could never get sick of ;) 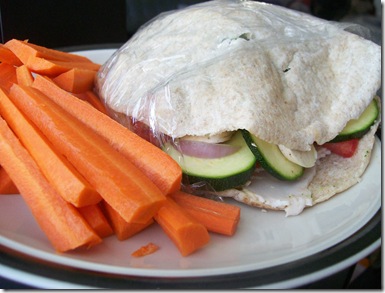 Pita with hummus, turkey, tomato, onion, mushrooms, green pepper and zucchini. Wrapped in reinforcements! The key to a sturdy pita. Oh, and some carrot sticks (organic, because they are the sweetest and juiciest and worth every penny!).

Then I rushed off to Starbucks, again! This time to meet a university friend who’s in town from Japan.  I sipped a Zen tea while we chatted about life after uni.

The only time I like green tea is when it’s infused with other flavours. Especially peppermint!

I was scheduled to work afternoon/evening today which is sometimes a nice change to the usual 9-5. This afternoon’s assignment was particularly interesting. I attended a lecture by Reverend Brent Hawkes. He’s originally from New Brunswick, but moved to Toronto in the 70’s to join a special ministry that’s tolerant of homosexuality. He was SO inspiring. The kind of man that just oozes passion and motivation. He was also the reverend that married the first gay and lesbian couples in the world in Toronto in 2001. He said he had to wear a bulletproof vest to the ceremony. Crazy, eh?

Anyways, I got in a quick supper break at home, and just had leftover solyanka and beet salad.

Second verse, same as the first. Just as good the second time around!

In light of my recent Starbucks trips, I thought it would be fun to re-post a series of Starbucks tips I published on my old blog back in March. Some of you may not know that I worked at Starbucks on and off for five years, at several locations. I even managed one during a brief break between high school and university! So without further ado, here are the tips:

1. Ask for no whip. Approximately one-third of a drink’s calories comes from the whipped cream.

2. Ask for non-fat, 1% (they can mix the skim and 2% together on request) or soy milk. Make sure you watch the barista make your drink. The milk canisters are the easiest thing to mix up. It’s never intentional, but pretty easy to dump 2% into a non-fat drink. I always double check the cup is marked as non-fat at the cash after I order, and with the barista when i pick it up at the hand-off counter.

3. Order your drink half-sweet or with sugar-free syrups. Not all syrups come in the sugar free option, so ask which ones they have (it can vary by location). If you don’t like artificial sweeteners, you can order your drink “half sweet” or even specify you just want “one pump of syrup” in your drink for a little sweet kick. This is another thing that’s easy to screw up, so don’t be scared to double check this one with the cashier or barista too.

4. Ask for your frappuccino to be made with skim milk and a shot of espresso to skip all the weirdo ingredients that go into the coffee base. Just keep in mind that the consistency will be a little less creamy.

5. Instead of an iced coffee (which is automatically sweetened), order an iced americano and add your own sweetener and milk. If it’s too strong, ask for one less shot of espresso.

6. Ask for your iced tea unsweetened and add honey yourself at the condiment stand. Be careful when you do this with the iced tea lemonades! The lemonade they use is verrry sour!

7. Order a chai latte as a “chai tea misto.” This way, you’ll get a drink made of half chai tea and half steamed milk, rather than one made with a chai syrup base. This tastes awesome when sweetened with a little honey!

7. Ask for your latte “dry” to get more foam and less milk. Cuts back on the calories and makes your drink stronger and creamier!

8. If your drink ever tastes off or not the way you ordered it, bring it back!It’s a Starbucks policy to automatically re-make any drink you’re not satisfied with. Don’t be scared of getting mean looks from the baristas, so long as you’re polite about it, they will be happy to give you another drink or help you find one you may like better! Remember, you’re paying serious cash for some of these drinks, you deserve to get a drink you like!

There you have it! What are your favourite drinks to order at cafes? I’m a dry nonfat cappuccino gal, sometimes with a squirt of vanilla if I want a sweet treat :)

See ya tomorrow for my first ever step class! Eeek!!

You are what you eat

Hi!! I just realized that looking back at my pictures, I may have actually taken a picture of almost everything I ate today! Including a shot of this guy who greeted me from my window first thing this morning.

I shall call him Dale ;) 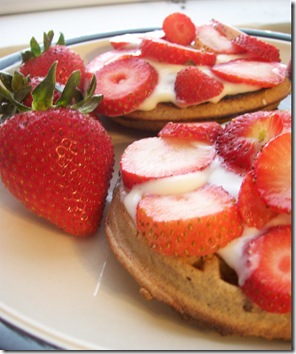 Been a while since I had this combo, don’t think I’ll ever get sick of it!

After breakfast, I had a coffee meeting with the executive producer of the local news show I used to host. They want be to be a fill-in anchor for their new, live, in-studio format! So I’ll be taking over whenever the regular host is sick, or on vacation. I said yes, because it’s one of those opportunities I know better than to turn down. I have no qualms about being on TV, I’m used to it by now, but live is a whole new ball game!

With a whole bunch of cinnamon stirred into the foam. So good! I hardly ever have specialty coffees now since I stopped drinking coffee in the afternoon. Add espresso machine to the list of kitchen items to get ;)

Once I got home, I popped a date + cashew butter and dragged myself out headed out for a 10k run. Damn! It was cold! 8 Celsius, so 46 Fahrenheit. The temperature was bearable once I got into it, but my nose was running like mad! Luckily, I’d remembered a piece of paper towel. But my nose was basically like a faucet the whole time.

I can’t complain that much though, because it was still a stellar run!

According to my own made-up schedule, today was supposed to be an 80 minute run, but that would have increased my weekly mileage too much with the 10k race this Sunday. So instead I did a practice 10k with no walk breaks! Usually I just run at a pace that feels good and challenging for 9 minutes, then walk for a minute. But today I ran straight out, consciously doing the first four miles around 9:45, then the last couple miles at 9:00 and under. I was pushing 7:30 in my last half mile and my lungs were good to go ;) Slow and steady wins the race, right?

Once I got home, I popped my Moosewood Cookbook creation in the oven while I stretched and showered. The first dish is called solyanka.

It’s a Balkan casserole made up of potatoes, cottage cheese, yogurt, cabbage, carrots, dill and a few other spices. I’d never seen anything like it before, and love all the ingredients, so I knew I had to make it!

I cut the recipe in half, to make three servings instead of six. 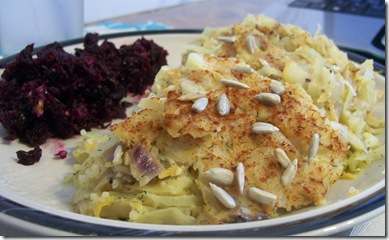 It smelled soooo good while baking in the oven and did not disappoint! I think the yogurt is what really made the dish for me. I often eat potatoes with cottage cheese, but have never tried yogurt with them.

I paired it with the Odessa beets recommended in the recipe.

This is grated beets mixed with prunes, garlic and lemon juice. I was nervous about this combo, but again, I enjoy all the ingredients separately, so why not together? This totally blew me away. So, so good. I had no idea beets and prunes would be such a wonderful marriage of flavours!!

I was supposed to go to work right after this, but the other reporter ended up covering one of my assignments. So I had some spare time to get stuff done around the apartment. I snacked on a frozen deep chocolate vitamuffin with peanut butter.

A sandwich made up of Yves veggie salami slices and marble cheese with an orange and boiled egg. Eaten at my desk. Then it was off for more work, and I snacked on a Kashi peanut peanut butter bar when I got back.

The chewy bars are the only kind of Kashi bars available in Canada. They’re alright.

A little bland, and not very filling. But pretty good compared to other granola bars out there. Plus, this box was on sale for $2 :)

I had one more small snack when I finally got home. 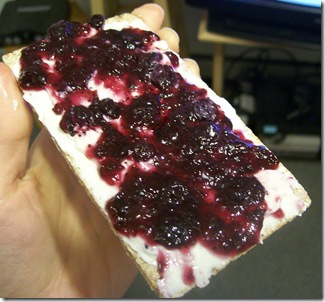 Laughing cow cheese and blueberry jam on a wasa cracker.

I admit, I really only bought it because of this on the lid… 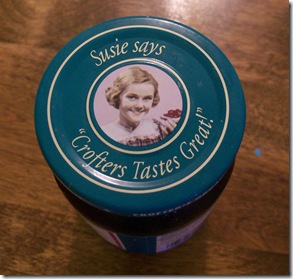 And that’s almost everything I ate today! I haven’t done a full recap like that in a while. My eats got pretty repetitive, so I’ve been trying to switch things up. It’s been a lot of fun! I’ve got even more kitchen experiments planned over the next few days that I’m excited for.

Question of the day: What are some foods you eat frequently and never get sick of? For me it’s pitas, carrot sticks, oatmeal, veggie burgers, wasa crackers, to name a few!

I’ve got another busy day on tap tomorrow. Starting with a BodyPump class which I’m totally “pumped” for (I couldn’t help myself). I’ve never been to a class like it before, and I expect to get sore! :P