The Great Move – Third and Final Round

Hello friends! Well, everything I own is now in the new place!! All together now – Amen!! :P

No pics of the place yet, I want to wait till the piles upon piles of boxes are cleared up first. Hopefully it will be a little more under control tomorrow.

So I started my day off at 5:30 am for a spin class at my new gym. Started with a little hotel coffee and a naner.

Spin was awesome. The spin classes at my old gym were quite small, so I was excited to go to a “real” one. First, the music wasn’t that bad! Remixed top 40 stuff that worked quite well with what we were doing. My instructor was this cute, feisty woman (with braces!) who got really into it. Very motivating :) It was 60 minutes total and tough as hell. Spin perfection!

Afterwards, I went back to the motel and hit up the continental breakfast. Quite possibly the saddest hotel breakfast I’ve ever participated in.

White english muffin, cold boiled egg, macintosh apple. I was starving after spin class, and gobbled this up, despite how incredibly sub-par it was. Whatever, I ain’t turnin’ down free food!

I’ve been starving all day. I think I may have burned more than I thought running up and down the stairs for four hours yesterday. Not even two hours after breakfast, my tummy started growling. So I dug into my bar stash and came up with this:

This didn’t last long either! Major tummy rumbles started occurring shortly after, so I went for an early lunch.

I went to Smitty’s, a breakfast-type place in the mall. Not the fanciest, but they have wireless internet, comfy booths, and let you loiter for as long as you want. I ordered grilled chicken, roasted veggies and a salad.

After I took the picture, I promptly cut up the chicken, mixed everything together and drizzled a little of the balsamic vinaigrette on top :)

This only lasted me two hours too! What is up?? Anyways, I was a drifter all afternoon while waiting for the fam to show up to help me move. I loitered in Starbucks for a while and made my needy tummy a PB&J. That seemed to be enough to power me through the last and final move. My sister and I had beads of sweat dripping down our brows at one point! My goodness! My biceps are already sore…

We rewarded our hard work with a lovely dinner at my fave local spot, Isaac’s Way.

Blurry photo courtesy of our waitress, who doesn’t know my cheap camera’s sweet spots ;) In case you can’t tell, that’s my sister Sara on the left, and my mom on the right. THANK YOU for your help!!! I owe them A LOT, I don’t know how to even begin thanking them for all their help…

My mom got her favourite, a lentil bulgur salad. 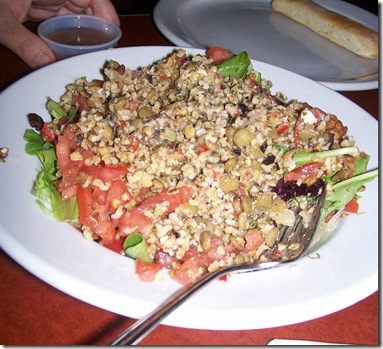 Sara got a quesadilla with sweet potato fries (which I had many of!) 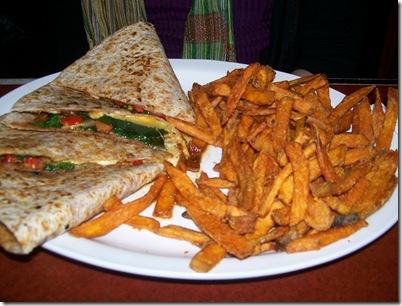 I ordered the cranberry tilapia with a salad. 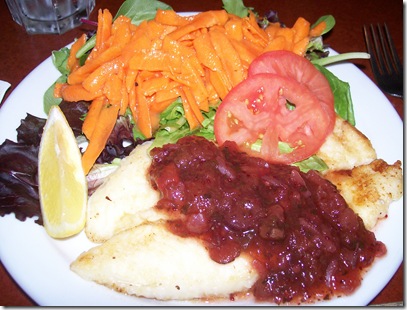 Bah! Damn you flash photography! It was good, but not quite as filling as I’d hoped. I’d ordered roasted red potatoes with it, but the waitress told me they were iffy and not to get them.

Then we came back and started unpacking and scrubbing everything down. We made a good dent, but still have lots to do tomorrow!

Alright friends, it’s waaaay past my bedtime (11 pm, I’m 80, I know). Sara is going to get up and run 5k with me in the morning! :D I have a feeling it will be a slower, “recovery” jog of sorts. These past few days have been pretty physically demanding!

Hope your Mondays went well! I’m behind on my fellow blog stalking. It shall recommence soon I hope :)

Question of the day: What’s the worst meal you were ever served? I have to say, the worst meal I ever ordered was a lobster paella in Cuba. The seafood tasted like rubber tires and I think it gave Chris E. Coli! You can read the recap here.

Thank you sooooo much for all the positive feedback on yesterday’s post! I don’t know why I was so nervous about posting that picture and talking about it. I guess I didn’t want to look like I was “showcasing” my weight loss in a “look at me” kind of way. But I have the awesomest readers ever, and you all understood the meaning behind the rambles :)

For the record, my blogging uniform isn’t as nice.

Sometimes I like not living with my boyfriend!! :P

I think I deserve to be lounging around in an oversized tee after my 4:30 am wake-up and crazy long bike ride today. Wanna hear about it? 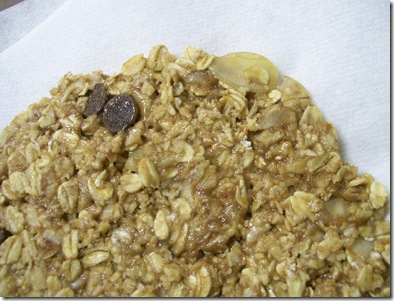 I changed things up and added sliced almonds instead of coconut. Livin on the edge.

My new favourite bar (Luna is in trouble!) 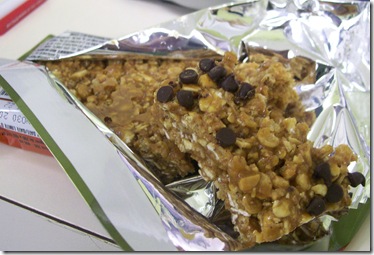 Peanut butter PowerBar. Kinda like a bar-shaped cookie! One of the best things about these bars is that the first ingredient is “whole oats.” Can’t go wrong with that, especially in a “protein bar.”

Lunch was not the usual white – but pink! 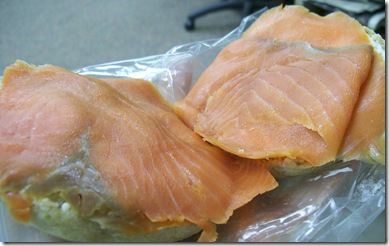 Smoked salmon and laughing cow cheese on an english muffin.

I was excited as this was my first braeburn experience. But I think I got a bad one, because there were some brown mushy spots inside even though it looked bruise-free. Good thing I’ve got more!

I then rushed home to watch the last 10k of the Tour de France. It was so exciting!! Cavendish (on his Scottie) whipped out in the last 1k and took his sixth stage. He may have lost the green jersey, but it was still pretty sweet :) 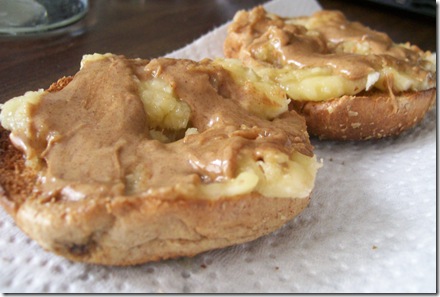 I was thisclose to putting off my long bike ride for this week. But in the end, I liked the idea of spending my afternoon on a “leisurely” bike ride :)

The first 30 minutes seemed to drag on, but I eventually got into a groove. I ate four dates with PB at the 90-minute mark. It was perfect! My energy was starting to wane a little, but it was just enough to carry me through that last hour. I just wish I didn’t have to pee after the first 20k :( By the end of the ride I didn’t want to get off!! However, my crotch, neck, wrists and bladder would not have been impressed with that.

I’m putting my morning workout off tomorrow until after work so my body has a proper 24 hours to recover from the bike ride. While it wasn’t overly taxing, it was still a significant amount of activity.

I had lots of time to think of what I was going to make for my recovery shake. 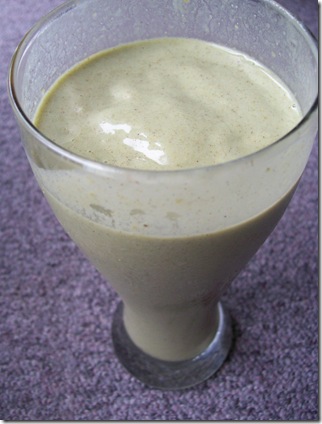 The papaya chunks were added after I tried it and felt the texture was off. They make it so much smoooother!

After stretching, rolling and showering, I got started on another awesome homemade burrito. 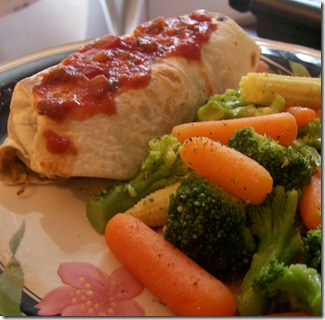 Don’t worry, I also had my “congratulatory piece of chocolate” for my bike ride ;)

Eeek! My landlord just stopped by and said they’re showing my apartment on Tuesday!!! I’m going to have to whip this place into shape! Oh my gosh, I don’t know if that’s possible. There are some closets that need some serious cleaning, and a floor that hasn’t been vacuumed in weeks because my vacuum cleaner is broken (a certain boyfriend told me not to fix it myself because he can do it, I have yet to see these “skillz”)

Random Question: Are you a tidy person??

This may or may not be obvious, but I’m really messy. I have this tendency to not notice when things are lying around or in the way…

Have a great start to your week! :D

Edited to add: I forgot! I’m on Twitter!! I joined in a moment of office boredom. Please come visit me over there, I’m completely lost and have no friends! http://twitter.com/BalanceSusan