I swear, I wasn’t going to post any pumpkin recipes this “season.” Mostly because I think it’s really overrated orange mush that people like to mask the flavour of with more complimentary flavours such as cinnamon and cloves.

We’ve talked about how it’s processed and in a can, right? Well, I’ve already contradicted myself once with an impromptu pumpkin cream cheese waffle posting, and today I’ll share with you why I had pumpkin hanging out in my fridge to begin with. Around these parts you can only get pumpkin in 28oz cans. That’s a lot of orange mush to be creative with.

I promise you, the next two recipes contain no cinnamon or cloves. This is pumpkin done savoury and edible!

Brown beef in a large pan with onion, garlic, peppers, sweet potato, and spices. Add in sauce, beans, and corn, and let simmer for 30 mins.

While beef mixture is simmering, mix together the cornbread ingredients. You can separate the dry and wet, but I’m not picky. The pumpkin and juices from the filling usually keeps it from getting too dry from over-mixing anyways.

When the beef is done simmering, pour it into a 9×13 casserole dish and pour cornbread batter overtop. Bake in a 400F oven for 25 minutes or until a toothpick comes out of the cornbread clean. 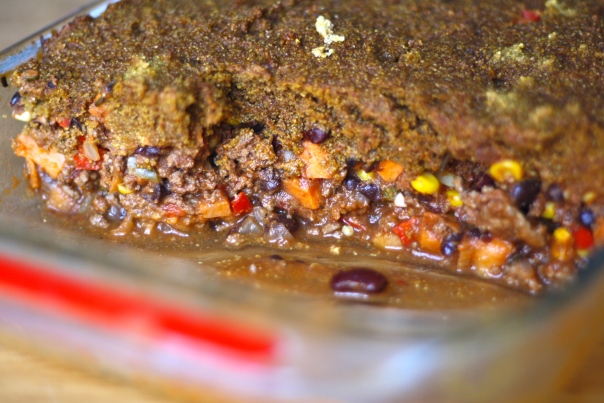 I went for a pumpkin whole wheat cornbread to make it healthier, of course. I figured if there was ever a time to healthify cornbread, it would be when there’s ground beef involved. The hint of molasses and whole wheat not only gave it depth in taste, but colour as well! I also snuck sweet potato in there for extra vegetables, which offset the heat of the chipotle wonderfully. I’m currently not allowed to eat hard cheese, but I didn’t miss it all. Overall, a dish that is definitely worth cracking open a can of orange mush for!

Of course, using only one cup of it, I had some leftovers. I was determined to get meals out of them and not just spiced desserts. 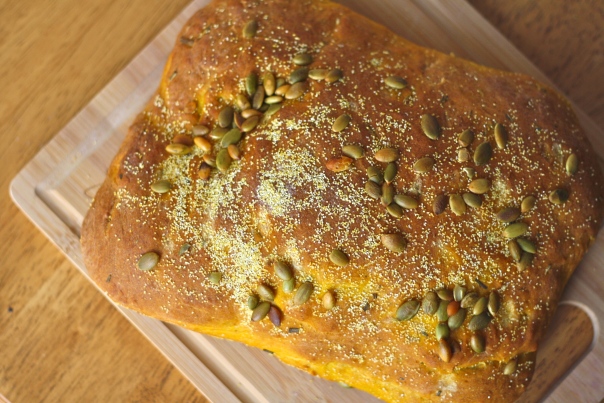 Enter Pumpkin Focaccia. Pronounced foe-caw-chuh (for my friends from the ‘view).

I based my version off of this recipe and it was freakin fantastic. I made the following changes:

I made it into two small rectangular loaves. One of which my family pretty much inhaled straight out of the oven slathered in butter. The rest I enjoyed with my usual fried eggs and cream cheese in the morning. 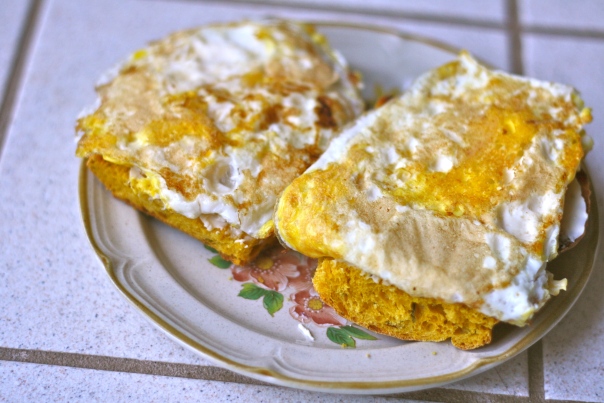 I can’t be helped.

These are just some of the highlights of many great dishes from the last three chemo-free weeks. I had chemo #9 of 12 on Wednesday and am back in the chair for #10 next Wednesday. Needless to say, I’ll be dragging my heels and taking a lot more naps for the next little bit. I’ve been trying to teach Buster how to fetch things for me, but uh, he’s an easily distracted pup.

As soon as he brings it to me, he comes in for cuddles and completely forgets about the toy.

Thankfully, he’s a pro at lying around too.

If you have any interest in hearing my speak about what it’s been like living with cancer click here to listen to Part 1 of a radio interview I did. Part 2 should be posted on that website after 12pm Atlantic time today. Also, if you’re in my area, be sure to check out the CBC’s Tree of Hope fundraiser on Nov. 24 to help directly benefit cancer patients like me in Moncton.

Have a great weekend!

Welcome to another work week! I wish I was heading off to work this morning like so many of you, but instead I will likely spend my day napping. Trust me, it’s not as glamorous as it sounds.

Actually, one of the most frustrating things about chemotherapy is that I have all this free time now, and absolutely no energy to do anything with it. Usually all I can muster is a very mild “work out” and hanging out with my family. Some days I try to run a few errands or clean my room. But the best days are those I find the energy to cook.

This coming week is a chemo week – in other words, my least favourite kind of week. But the weekends preceding my chemo weeks are also my best. My body has recovered enough that I feel *almost* normal. Or the closest to normal I can get these days anyways!

So on these weekends you will likely find me in the kitchen. And boy, do I have a kitchen creation to share with you!

This recipe is “moussaka-inspred,” meaning it bears only a small resemblance to the traditional dish to make it a little healthier and easier to cook. This is definitely not a weeknight dinner, but rather something you could make on a Sunday and have the leftovers for the rest of the week. Now you know for next weekend!

Peel and cube the potatoes and add to a pot of boiling water.

Brown the beef in a large pan with onion, green pepper, garlic, and celery. Add spices and seasoning along with the jar of tomato sauce. Simmer for around 30 minutes.

While beef is simmering, make mashed potatoes. Slice the eggplant and zucchini lengthwise. Traditional recipes would have you sauté them first, but I usually don’t bother and leave them raw. I never notice how bitter the eggplant is.

Cover eggplant slices on the bottom of a 9×13 baking dish. Spread half of the beef mixture on top. Cover with zucchini slices and add remaining beef on top of zucchini. Spread mashed potatoes over top of beef.

After hours of chopping, stirring, and cleaning my mess in the kitchen, I sat down to eat my hot meal only to suddenly feel too sick to eat it! Ahhh the joys of chemo.

Thankfully, I’ve since been able to eat the leftovers after a quick 2 minutes in the microwave. It is FANTASTIC and worth every minute in the kitchen. If you ask me, making hearty, healthy food is one of the best ways to use what little energy I have. Now if you don’t mind, I think it’s time for another nap. 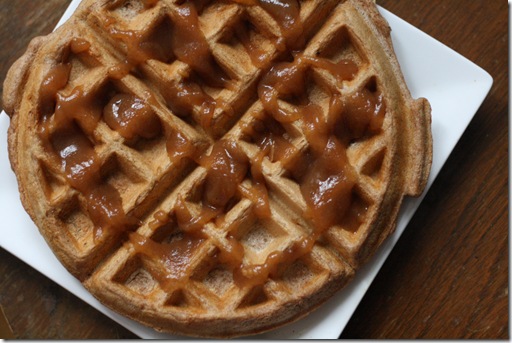 Confession: I did not eat waffles for breakfast this morning. I woke up with a lingering fever and wanted nothing but a bacon and egg sandwich. But it feels wrong to blog about waffles on any other day. 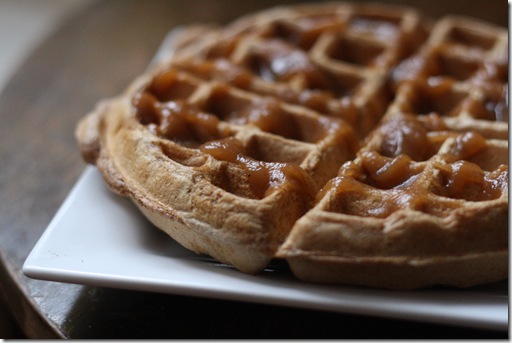 Mix the dry, add the wet, then waffle it up! Today’s are extra special because they’re topped with this Pear Butter my sister gave me for Christmas.

My sister lives in Quebec and got it at the market, hence the French label. Not only is the idea of pear butter itself amazing, but this stuff is spiced with cardamom. Sweet Mary, I love Cardamom. Am just too cheap to ever buy it. 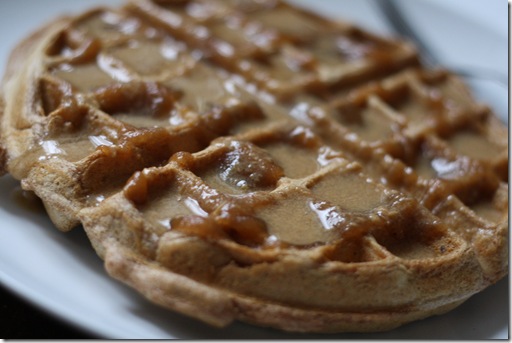 I spruced it up even more by drizzling maple syrup whisked with cashew butter over top.

Pear + cardamom + cashew + maple. These are the things dreams are made of.

I don’t have much to report today as I am still on the mend. My sister and I had a week of activities planned, but I am instead confined to my bed with a cool compress and bottle of acetometaphin.

We did however make it to the grocery store, where I was able to pick up the ingredients necessary for a “Sick Soup.” Apart from grilled cheese and fried egg sandwiches, I’ve been craving beef stew. Which is odd, because I never liked beef stew growing up. 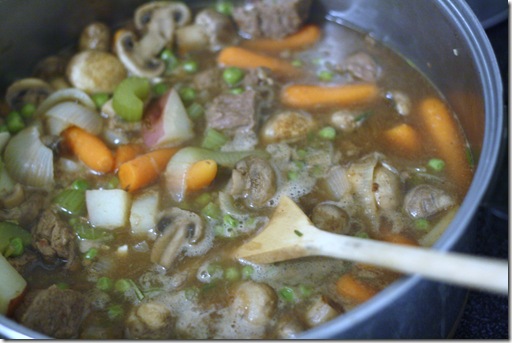 Traditional beef stew calls for red wine. I looooove cooking with wine, but I absolutely despise drinking it. So I wasn’t too keen on having the better part of a bottle leftover.

Instead I opted to create a flavourful stew filled with the ingredients I craved. It also had to be easy as I’m sick and can’t stand around for too long without having to take a rest. The result was amazing. Definitely a winner for those of you without a dutch oven or don’t have wine on hand!

Put a large pot over medium heat. Add cooking oil, beef and flour. Cook until all sides are brown. Meanwhile, in a pan, sauté onion, mushrooms and garlic until onions are soft. When beef and veggies are done, add the sautéed veggies to the beef pot along with all the remaining ingredients. Simmer for 30 minutes or until carrots and potatoes are cooked.

It’s true what they say. Soup really does cure all!!

Thank you for all the well wishes this week! I have to admit, I am very frustrated about the whole thing. I’ve been sick more over these last six months in Toronto than I have been over the last six years. This current sickness began as soon as I landed back in Toronto last Monday. I’ve actually only worked out twice in the last ten days! Perhaps my immune system wasn’t prepared for all this “big city” living.

If I ever do get better, I plan on making another Simply Switch. I want to switch out “sitting on my butt time” for “going out and exploring time.” I’ve already started working on a list of things I still have to do in Toronto. Such as…

I can’t really explain the attraction apart from it being a ridiculous and giant department store smack in the middle of a city. Flashing lights and all. I must buy one of their Elvis busts to commemorate my time in Toronto.

Speaking of things that stick out in a city… how about a huge castle?

Shop at the Carrot Common

Home to the organic grocer The Big Carrot and a square filled with other hippy-dippy stores. 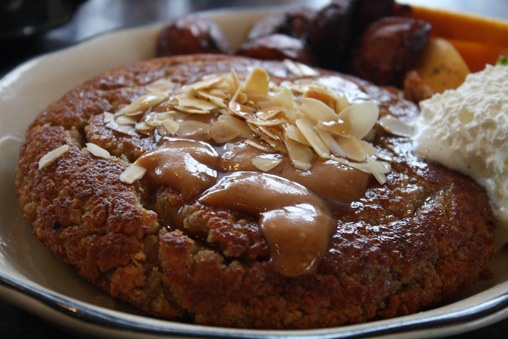 My life will not be complete until me and this pancake reunite.

And with that, I rest. I actually have to return to work tomorrow and it would be nice if the cool compress didn’t have to come with.

Question of the Day: What’s your favourite kind of soup? Would you believe I never used to like soup until recently? Give me some ideas of kinds I should make!