← One Bright Birthday
The Next Great Adventure →

Lung Update + Will It French Toast Round 3

Good news friends! I (finally) got to meet with a respirologist yesterday, who said my lung function is almost back to normal!

You may recall that two months ago I found out one of my chemo drugs was poisoning my lungs. A side effect called Bleomycin lung toxicity. It’s pretty serious. It can cause permanent damage and even be fatal. At the time I did a pulmonary function test that I could barely get through thanks to my inability to take a proper breath without coughing. But the test I took last week showed my lung function has improved by 100% in some areas!

Clearly, I knew I was doing better just from how my lungs felt throughout the day. But I’m no doctor, so it was nice to have confirmation from one. My biggest fear was that I’d have lung damage that would prevent me from exercising in the future, but the respirologist said my lungs are in good enough shape to run now if I wanted to. My oncologist however won’t let me until I’m done chemo, which I guess makes sense. But I so badly just want to pick my feet up off the ground and move fast when I’m out on my walks every day. I’ve got a need to run run run.

I also got to watch the respirologist pull up my scans and x-rays from over the past 5.5 months which was both neat and surreal. No matter how many times I talk and think about a giant mass in my chest, it is still weird to see a picture of it clouding around my skeleton. Everyone is impressed by how fast it’s shrinking (thank goodness, because they were also horrified by how large it was). Fast to grow, fast to shrink maybe?

Here’s hoping it’s gone by the time I get my PET scan next month. I’m getting nervous I may need more chemo.

Blathering about my health aside, I have a decidedly unhealthy breakfast treat to share with you today. 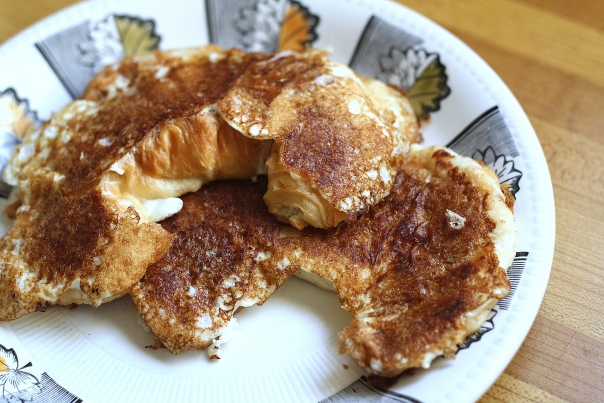 Well, it depends on your version of unhealthy. Croissants? Okay, kind of unhealthy (read this post to find out why). Turning croissants into French toast? Okay, maybe still kind of unhealthy. But in order to “balance” things out, I cut them in half and soaked them in egg whites and cinnamon. Straight up protein to my butter and pastry. And treating yourself to something delicious? Healthy!

Add this to my ongoing list of “Will it French toast?” experiments. The result was FANTASTIC. So buttery. A great way to use up croissants that are going stale. I think this would be a fun treat to add to the Christmas breakfast lineup this year. I would recommend not over-soaking the croissants, as the dough can easily get mushy. And don’t cook them in a overly hot pan, as the outsides are more likely to brown.

With that, I am off. I’ve been a bit of a busy bee these past few days because I’ve been feeling so well. But today I’m laying low to recharge and save up some spoons. Have a good one!

← One Bright Birthday
The Next Great Adventure →