Would you believe that one of the things I was worried about when I started chemotherapy was that I would lose my appetite and get sickly thin? Har har har. I should have known better. It will take more than a few poisons to kill my appetite.

There are however food restrictions that come with chemotherapy. In the beginning, my ABVD drugs just had general guidelines. Because they lower my immune system, I have to stay away from foods that are at a high risk for bacteria. Things like sushi or smoked meats. I stay from berries or other produce that are hard to clean. I stopped eating citrus as it can irritate the deteriorating lining of my mouth. I also try to cook my foods well to kill off any bacteria and make for easier digesting.

My new drug regimen however includes a pill called Procarbazine, which comes with a slew of whacky food restrictions. I’ve been putting off mentioning it on the blog because, well, I’m not sure if I quite understand it. I know there are a lot of smart science-y folk who read my blog and I don’t want to offend them by butchering any sort of explanation. I try really hard to keep up with the science of this cancer stuff, but sometimes I read a sentence over and over again and am still left sitting there dumbfounded.

So, basically, all I can tell you is that the Procarbazine drug inhibits MOA, which has something to do with oxidizing and amino. When I eat foods that contain Tyramine (which is an amino of sort, from what I can gather), it reacts with what the drug is doing to my body and causes a “hypertensive emergency.” From what I understand, that can cause migraines, mild to severe high blood pressure, and even irreversible organ damage.

This chemo stuff is fun, no? (that’s dripping with sarcasm, by the way)

Anyways, apart from the confusing reasons as to why I can’t eat certain foods, the list of foods that I can’t eat are also downright wonky.

I bolded some of them as those are the ones I miss the most! There seems to be no rhyme or reason to this list, but apparently something happens to these foods during the fermentation or decaying process that effects the level of tyramine and makes them react with my drugs.

The oncology pharmacist also told me it’s nothing to freak out too much over. A little bit here or there won’t kill me, it’s just better to stay away from these things to be on the safe side. Especially those that are higher in tyramine than others.

I went out for brunch the weekend after starting my new drug regimen and quickly realized how difficult it is to order off a brunch menu when you’re not allowed bacon or cheese. My mom, sister, and I went to Café Maelström here in Moncton, forgetting that they specialize in cheesy, smoky meat paninis.

So I’ve been sticking to the sweeter side of things: 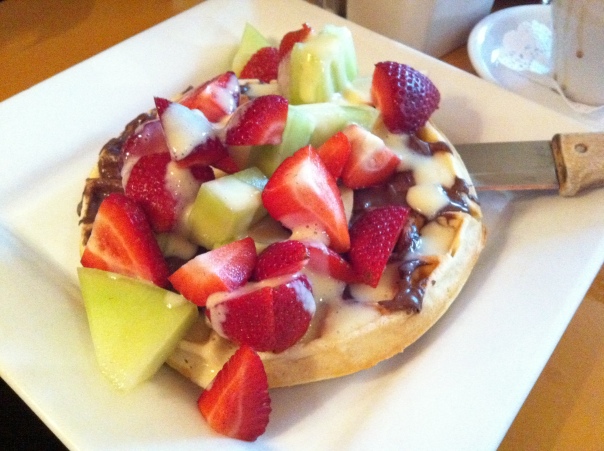 A Belgian waffle smothered in Nutella, custard, and fresh fruit (that I had to special order to keep the restricted fruit off). Crazy delicious, but significantly lacking in bacon.

Lunch is just as difficult. I also had a hard time ordering at Café Archibald when I went there this week with a friend. They specialize in savoury crepes stuffed with (again) smoked meat and cheese. I instead opted for a hummus and chicken pizza without the cheese, then tested my luck with a spinach salad topped with a few bacon bits. 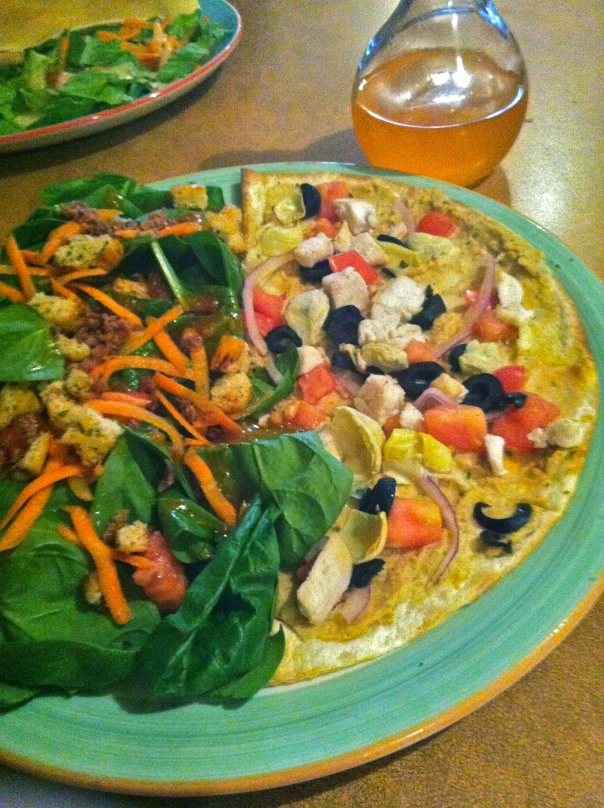 Ordering dessert however was a cinch. Apple Crumble Crepe!

That would be actual scoops of apples and crumble topping inside a light crepe, topped with sticky caramel and vanilla ice cream. So good. If only I could just live off of dessert on this new diet.

In reality, I mostly live off of toast, cream cheese, and fried eggs doused in pepper and sea salt. 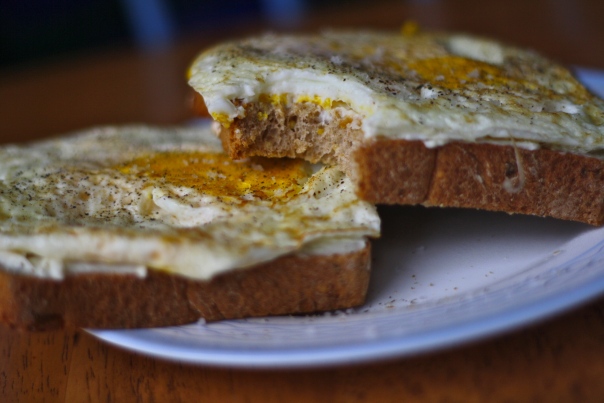 It’s the only food I can always stomach, no matter what. I’ve eaten this about 5 days a week since starting chemotherapy in August. Sometimes twice a day when I’m feeling really sick. I don’t know what I would do if I suddenly couldn’t eat this anymore!

Even though my appetite is as raging as ever, there are still days where my stomach is sensitive and I’m too tired to put together anything substantial. While I try to get in my green veggies every day, sometimes I end up with something like this for dinner: 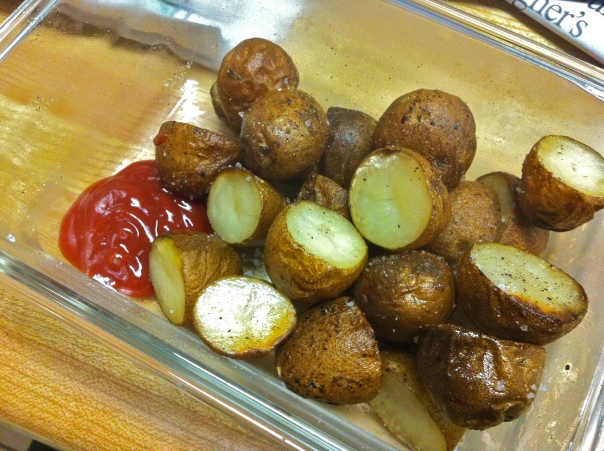 A dish of roasted potatoes with ketchup, and nothing else. It’s when I say “Fuck it, I’m sick, I’m eating what I want.” Or if you follow me on Twitter, what I also call a #chemoperk ;)

And in completely unrelated news, my Baby Bear is home!

We are both zonked today after an active couple days. It’s kinda rainy here, so I think I’ll put the slow cooker on and rest up in preparation for the weekend. Have a great one! Eat some cheese and bacon for me!!