It’s been about a month since I did a “snapshots” post and the pictures are building up on my iPhone. Here’s some more extra photos from here and there over the past month. Some from Instagram and Twitter, others I got too lazy to post. But certainly a fun little snapshot into my day-to-day life! 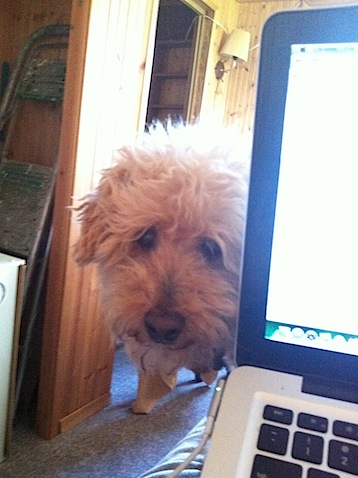 Archie hates it when I stare at a computer screen instead of paying attention to him.
Something he makes quite clear to communicate to me! 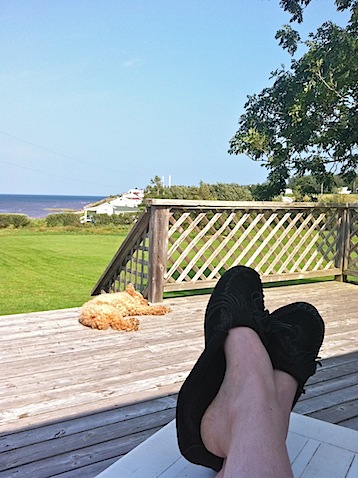 Last day at the cottage. Feet up, sunbathing poodle.

Fun fact: I’m not allowed sushi while on chemo (ie raw fish). So California rolls it is.

My stomach is covered in bruises from the two needles I have to give myself daily.
I bruise extra easily because of the blood thinners I’m on. This is just one of the more colourful ones as of late.

Cashew the cat was playing on my laptop keyboard.
What do you think she was trying to tell me??
Worth noting that after this photo was taken, she opened up an episode of 30 Rock. 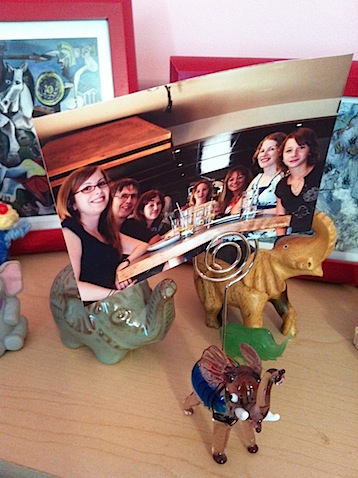 Step-family portrait in a frame from Janetha.
I happen to collect elephant figurines. They’re my favourite animal! 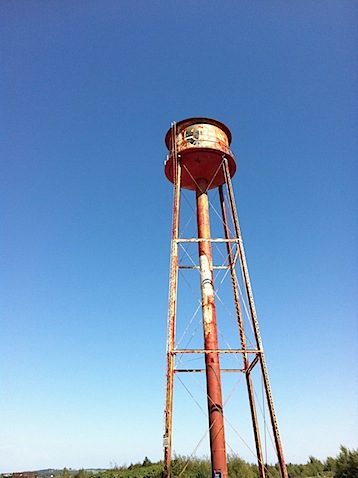 Water tower in Hillsborough, NB.
Severely disappointed the Animaniacs were nowhere to be seen.

One of my favourite meals from all the farm fresh tomatoes I got:
bagel + cream cheese + tomato + S&P 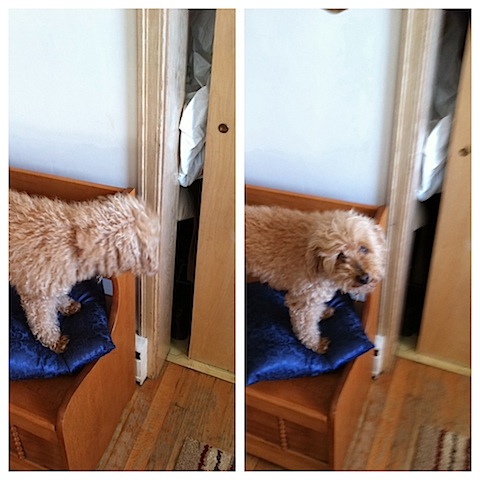 Archie is able to sense when I plan on taking him for a walk.
Even before I put my shoes on or start getting ready, he’ll jump up on this bench and try to get at his leash in the closet.

I recently discovered I have the same haircut now as I did 20 years ago.

But wouldn’t it be awesome if chemotherapy was like drinking a milkshake?

My hobbies have gone from running and working out to knitting and rug hooking. 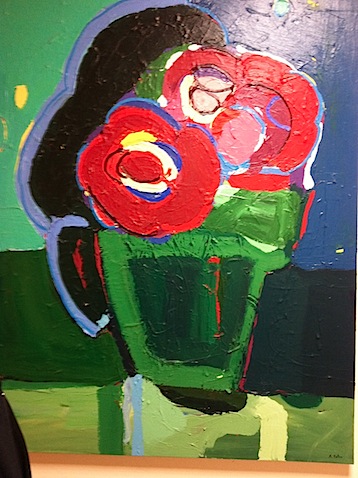 Painting in the hospital that I think looks like Conan O’Brien, my mom in turn thinks I’m crazy.
I can’t be the only one who sees it?

Attempt at taking cute picture with kitty leads to a kitty attack.
It’s how they show their love, right? 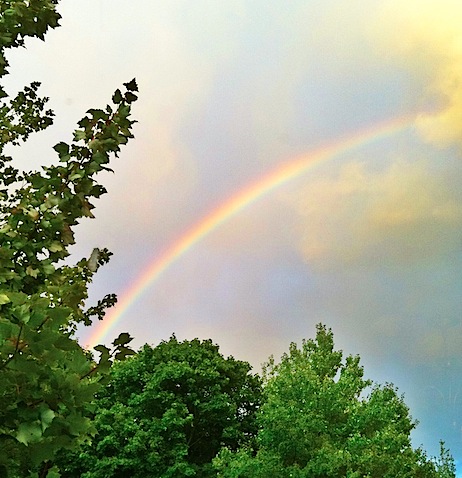 Archie trying to get at his leash again.
That’s the “You finally got off the computer which means you are taking me for a walk!” face.

Randomly had a craving for junk food the other day and bought these items at the grocery store. Only these items.
Scotsburn is the best ice cream other than Cows in the Maritimes, FYI. 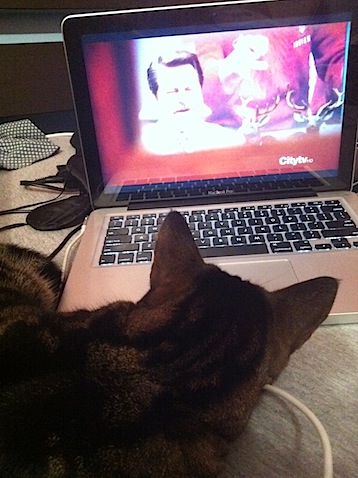 Watching Parks and Recreation with Cashew. 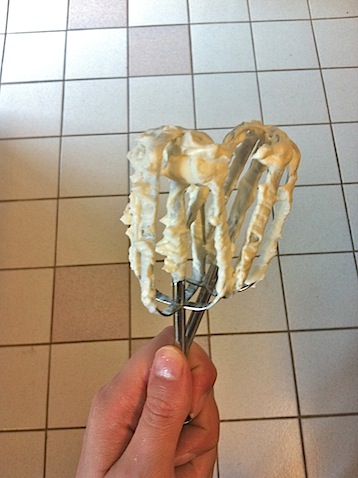 Best part of baking = licking the bowl and utensils.

A piece of the coconut cream pie I made for my mom’s birthday!
The crust was meh, but the filling was superb. 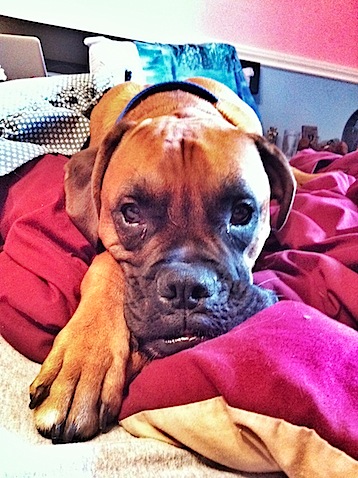 Buddy is the most forlorn dog I’ve ever met. Always a frown and big, big sighs.

Brunch at Calactus! Tofu rancheros with a side of potatoes.

Brunch is my favourite time of the week! With my mom and aunt.

Boxers take up significantly more room in bed than poodles.

Taken yesterday after finally getting dressed and going for a walk at 5pm. It went up to 27C!

I will never grow tired of living in a small town surrounded by TREES!
The big city was certainly missing that.

Off to get poked and prodded this morning. Have a good one!

Welcome to another work week! I wish I was heading off to work this morning like so many of you, but instead I will likely spend my day napping. Trust me, it’s not as glamorous as it sounds.

Actually, one of the most frustrating things about chemotherapy is that I have all this free time now, and absolutely no energy to do anything with it. Usually all I can muster is a very mild “work out” and hanging out with my family. Some days I try to run a few errands or clean my room. But the best days are those I find the energy to cook.

This coming week is a chemo week – in other words, my least favourite kind of week. But the weekends preceding my chemo weeks are also my best. My body has recovered enough that I feel *almost* normal. Or the closest to normal I can get these days anyways!

So on these weekends you will likely find me in the kitchen. And boy, do I have a kitchen creation to share with you!

This recipe is “moussaka-inspred,” meaning it bears only a small resemblance to the traditional dish to make it a little healthier and easier to cook. This is definitely not a weeknight dinner, but rather something you could make on a Sunday and have the leftovers for the rest of the week. Now you know for next weekend!

Peel and cube the potatoes and add to a pot of boiling water.

Brown the beef in a large pan with onion, green pepper, garlic, and celery. Add spices and seasoning along with the jar of tomato sauce. Simmer for around 30 minutes.

While beef is simmering, make mashed potatoes. Slice the eggplant and zucchini lengthwise. Traditional recipes would have you sauté them first, but I usually don’t bother and leave them raw. I never notice how bitter the eggplant is.

Cover eggplant slices on the bottom of a 9×13 baking dish. Spread half of the beef mixture on top. Cover with zucchini slices and add remaining beef on top of zucchini. Spread mashed potatoes over top of beef. 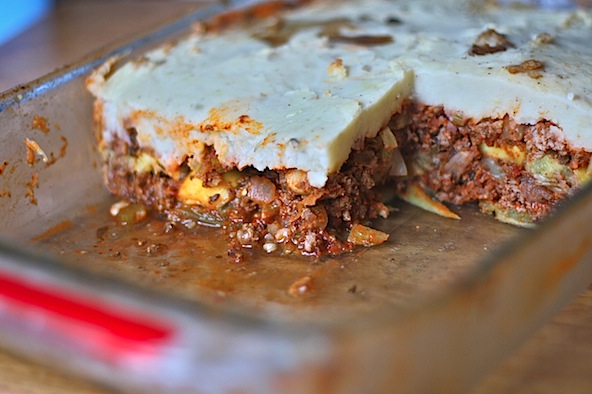 After hours of chopping, stirring, and cleaning my mess in the kitchen, I sat down to eat my hot meal only to suddenly feel too sick to eat it! Ahhh the joys of chemo.

Thankfully, I’ve since been able to eat the leftovers after a quick 2 minutes in the microwave. It is FANTASTIC and worth every minute in the kitchen. If you ask me, making hearty, healthy food is one of the best ways to use what little energy I have. Now if you don’t mind, I think it’s time for another nap.

I’ve been debating writing this letter for a while. For one, it’s a rather cheesy way to communicate, no? But mostly because I prefer ignoring your presence. You are in no way a part of my body, but something I feel I must co-exist with.

I am writing you because I am angry with you. Not for what you have done to my body, but rather what you have taken from my life. I am angry that you have robbed me of my 25th year on this earth. A year I will never get back. A year that should have been spent exploring and having fun. Because of you, it was instead spent in a hospital getting procedures and at home feeling ill.

Cancer, I have no idea why you chose my body. I mean, I’d done my fair share of smoking and drinking, but I cleaned up my act. I tried really hard to be good to my body in recent years, but it was still not strong enough to fight you off.

When I am old and look back on my life, there will now be a big hole where the year 25 sits. My time as a person in their mid-twenties will always be overshadowed by your presence. I will never know what this period of life is like had you not come along.

Cancer, I am also angry because even when you’re gone, I’ll still have to clean up the mess you left behind. My life won’t immediately go back to being great, and it will be a long time before it has any semblance of normal. Because of you, I will live in fear of getting sick again. Really sick. Because of you, I have now thought way more about my own mortality than any 25-year-old ever should.

Please do not take this letter as any sort of truce. I still refuse to accept that you are in any way a part of my body. On the contrary, I am instead asking you to vacate the premises immediately. I expect you to be gone by January 23, 2012 – my 26th birthday.