Remember when I proclaimed The Grilled Cheese the coolest restaurant idea in Toronto? I still maintain that proclamation, but that doesn’t mean School Bakery & Cafe doesn’t come pretty darn close.

Located just on the outskirts of Liberty Village, School was a bit of an afterthought on my Toronto Bucket List. Reader Joanne suggested it in the comments and I was reminded of reading reviews on it a while back.

Being on the other end of the city (it’s way out West, I come from the East), I wasn’t sure if I’d find the time to make it there. My friends and I already had Sunday brunch plans for this week. Which meant I’d have to be motivated enough to get there on my own for a solo weekday brunch.

Until we realized that we could brunch on Saturday too. What a novel idea – both days of the weekend! I immediately suggested this place and my friends agreed upon seeing the spectacular menu.

We arrived around 12:45pm to a line-up out the door. Waiting for brunch in this city is just the norm. That’s why it’s always best to go with a small group of friends. The smaller the party, the faster you’ll get seated!

I loved this place the second we made it inside the door. Unlike other cramped brunch places in the city, School is made up of two large rooms. Including a garage-type door they open up for a patio in the summer. There’s also the open kitchen concept, which I lovelovelove.

The decor of School is just that – reminiscent of being in a school down to the very last detail. Chalkboards and books line the walls. It’s even inside an institutional looking building that reminds me of an actual school. 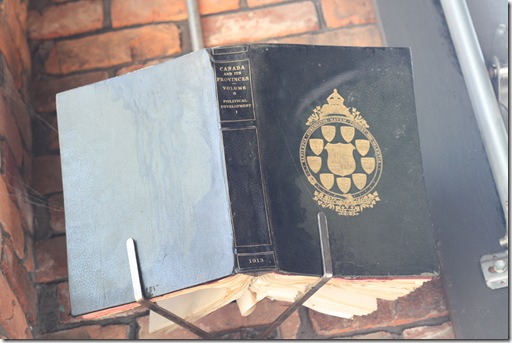 Or the apple centerpiece on every table…

But the menu is where School really shines through, not just the loose-leaf it’s printed on. 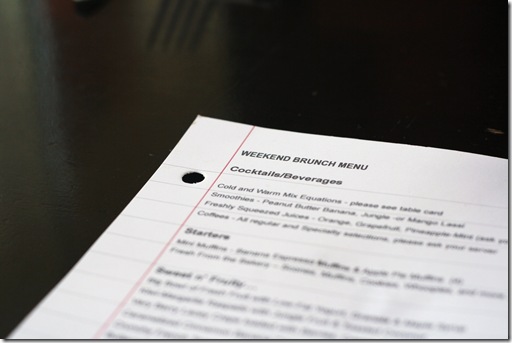 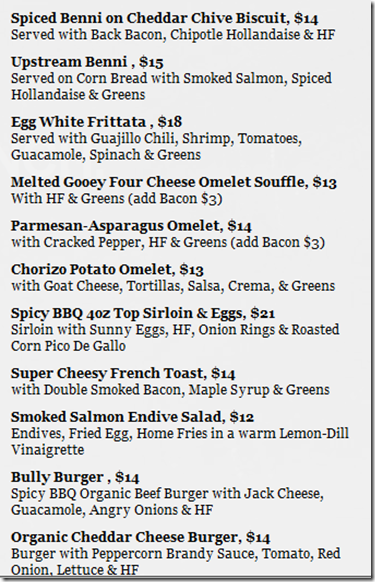 My friends, this was a hard decision. I studied this menu like any good student would. I went back and forth between Super Cheesy French Toast, Smoked Salmon Endive Salad, or maybe the Upstream Benni?

With double smoked bacon, maple syrup and greens. This was probably the thickest sliced French toast I’ve ever seen. Still incredibly light and fluffy though. The gooey cheese was actually the perfect compliment to the eggy bread, and the maple syrup made it the perfect blend of sweet & savoury.

The boys went for the Melted Gooey Four Cheese Omelet Soufflé. They said it was a lot like a fluffy egg pancake.

And what did I finally decide on? 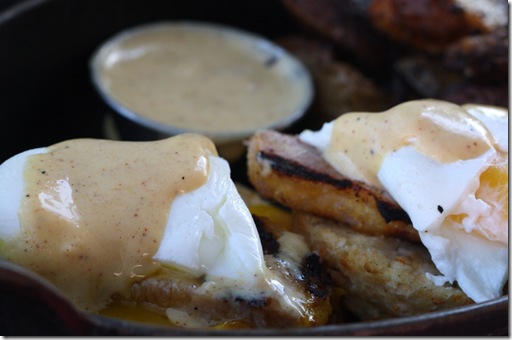 That would be the Spiced Benni on Cheddar Chive Biscuit served with back bacon, chipotle hollandaise and home fries.

I asked for the hollandaise on the side as I don’t actually like it. But I spread a little on top just to get the spiciness of it. The eggs came out perfectly poached and runny. The bacon in thick slices. Then there was the biscuit.

Hands down, the best part of the meal was the biscuit. It was even a little spicy. The perfect size and shape for the benni, and didn’t turn to mush under the bacon and runny eggs.

The home fries were spectacular to boot. Crisp and slightly black on the outside, soft on the inside. Not too greasy and the perfect two-bite size.

Apart from their brunch, I’d also heard good things about School’s bakery. Something I was easily convinced of as soon as I tried their biscuit. So just as we were about to get the bill, I asked for an extra treat to-go. Something I drooled over as we stood waiting to get in earlier.

That my friends, is a Nutella scone (also pictured earlier in the post). I spent all afternoon walking down Yonge St. with it in my purse. Like, from Lawrence to Bloor stations. Just over four miles. I thought for sure I’d destroyed this thing of beauty during my wanderings, ripping into it immediately when I got home. 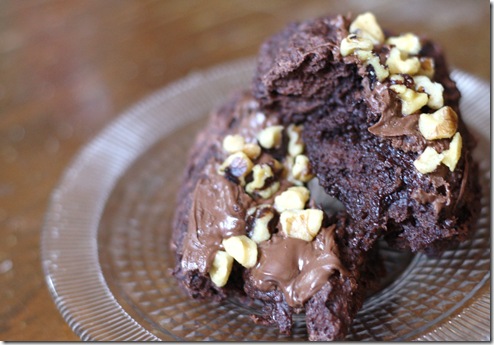 The scones had been just pulled out of the oven when the waitress gave this to me. I popped it in the microwave for a few seconds. Long enough to make the chocolate flavour stand out and the nutella on top to melt. It was very soft for a scone without the sweetness of a cake. A little spice in there too. This, and a side of celery may have been my dinner on Saturday…

Overall, School gets a passing grade. I will say the wait to get our food was longer than acceptable, and they did mess up one of our orders. The price is also a little high for brunch. I don’t normally spend 20 bucks on breakfast (or err, “second breakfast” in this case). Still though, totally worth the trip and price for the one-time experience.

I have one more Toronto brunch review to do, then I plan on doing a post featuring my top brunch spots and dishes. You’ll just have to wait to see how School shaped up compared to the rest of the class ;)