← How To Tie Your Shoes
The Perfect Tricep Dip →

A while back, my roommate told me about this amazing lunch place downtown with wraps and soups. She gushed about how delicious it was and I was left wondering what was so special about a simple soup and sandwich.

Ravi Soups is a bit of a Toronto institution located on Adelaide in the Entertainment District. After a rumour that one was opening up in the East end, I did a little research and discovered this was a favourite downtown lunch spot. I caved and made a lunch date with my roommie. You know me, I had to see what all the fuss was about!

I loved the creative flavour combos for both the soups and wraps. I want to try them all. So I opted for the wrap + soup combo for 12 bucks. But you can also get a GIANT bowl of soup for the same price. 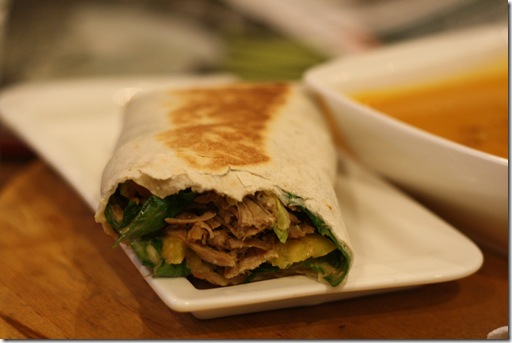 The pork was perfectly cooked and paired well with the tangy slaw which included big hunks of mango. Easily one of the best wraps I’ve had in TO and for once better than one I could assemble at home.

I almost opted for the daily stew with ham and white beans… but the butternut squash special sounded like the perfect compliment to my meaty wrap.

Loved the bacon on top for a little smoky flavour to the otherwise sweet soup. The Asian pear was a good choice as it maintained its crunch in the hot dish. I wasn’t as “wowed” by the soup as I was with my wrap. I’ve had some pretty darn good butternut squash soups before, and this one was a little bland and forgettable.

Roommie Megan meanwhile got the stew. 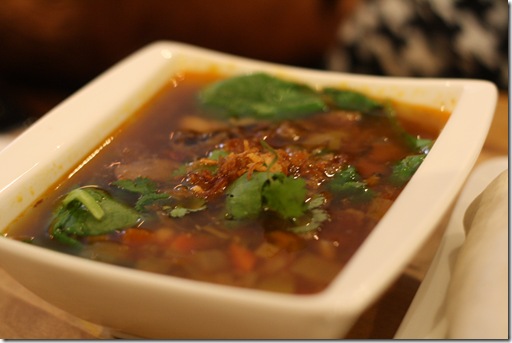 Sounds like an amazing flavour combination, no? I couldn’t try it as I’m allergic to pineapple, and Megan said there were big hunks of it in there.

I can finally see how a simple soup + wrap combo can turn into something people rave about. This was unlike any other deli lunch place! I also kind of liked the seating arrangement – one GIANT table. It’s such a “big city” way of doing things and a nice opportunity to get up close with your fellow lunch-goers. No picture of this seating arrangement though in order to protect the innocent.

After saying goodbye to Megan (she’s got a real job), I continued my downtown wanderings in search for the perfect end to the perfect meal.

Another Toronto institution I’m always hearing about. More for their cute male baristas than their espresso, but I’ll still take it.

What I really wanted was a chocolate-y sumthinsumthin to tame that post-meal sweet tooth. Instead I opted for an espresso macchiato. Good thing too, as the espresso here is just as sweet as their cute baristas!

Oddly enough, this cafe also uses the one-giant-table method as opposed to smaller individual tables. People watchers would love this. I eavesdropped on some very entertaining conversations whilst sipping on my espresso.

I ended my downtown lunchtime wanderings at the legendary Horseshoe Tavern. Not for a drink, but something even more exciting. 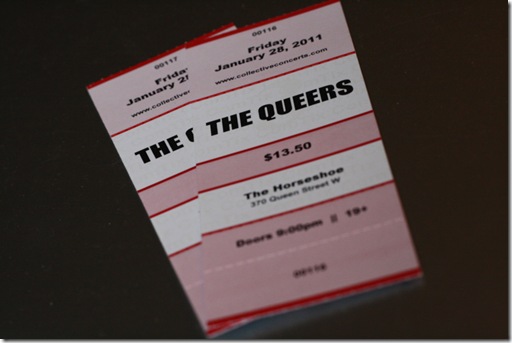 That would be tickets to my favourite highschool band. I know all the words to all of their 3-minute pop-punk hits. Can’t. Wait.

With a full belly and caffeinated spring to my step, I left downtown behind and travelled North to my job. The one where I hang out in a gym all day torturing people. It’s probably for the better that I work next to a treadmill and not a RaviSoups anyways ;)

Question of the Day: What are your favourite things to put in a wrap? I was anti-wrap for a long time after working in a deli where I assembled what felt like hundreds a day. But my all-time fave is curried salmon with sweet potato and spinach.

← How To Tie Your Shoes
The Perfect Tricep Dip →