Like how I make the Waffle Wednesday font match the colour of the waffle toppings? Yeah, I like to make my blog look professional like that ;)

This week’s topping comes to us from a box of local strawberries I bought for a dollar because they were on their way out.

They barely had a day left and I didn’t feel like doing anything fancy with them. So I chopped up the good ones and mixed them into plain yogurt. After a day of sitting in the container I had naturally sweetened strawberry yogurt with huge chunks of berries! I loved this, will definitely not scoff at a box of overripe berries again. 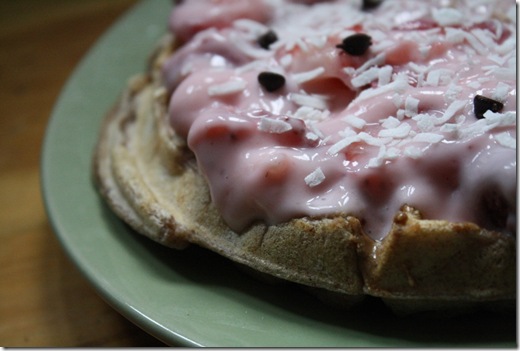 For the waffle, I mixed up my usual protein waffle batter as of late. Except this time I doubled it to get two giant waffles from the belgian press.

I actually ate the above waffle on Tuesday. After working for 15 hours on Monday, I thankfully didn’t have any clients until 6pm on Tuesday. Which meant I stayed in my jammies until 4pm. However, I still have my Wednesday morning client, which means I’m up before dawn at this time every week now. Thinking ahead on Tuesday, I popped the second waffle in the freezer for an early morning treat.

I woke up a little earlier this morning so I could eat the waffle at home and not on the streetcar. Had just enough time to pop it in the toaster oven, fry up a couple eggs, and guzzle back a mug of coffee.

Runny egg yolks combined with sugar-free syrup made for an awesome waffle topper. My oh my. Not to mention, all the fat and protein adequately silenced my morning hunger beast!

Fret not though. I am getting my carbs in as well. 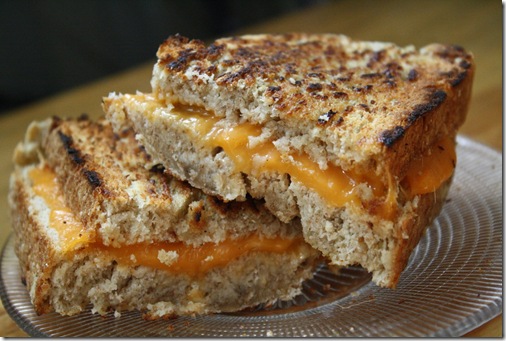 I was been craving a grilled cheese like woah. I usually don’t get intense food cravings, but the thought of greasy melty cheese between two pieces of hot crispy carbs had been floating in my mind for days. On Tuesday, I finally succumbed with a couple pieces of my homemade Irish brown soda bread and old cheddar cheese.

To really kick this craving, I did nothing at all to healthify it. Used real butter with thick slices of both bread and cheese. Hit. The. Spot. Kept me satisfied for 5 hours.

Polished it off with a local McIntosh apple. 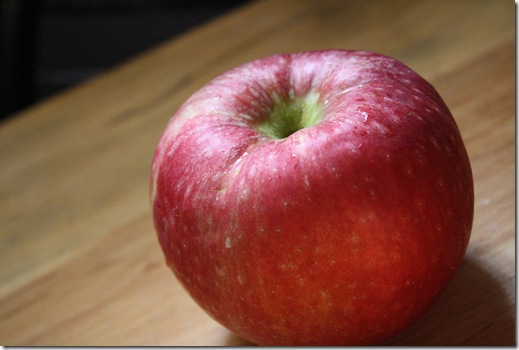 McIntosh isn’t my favourite snacking apple. But they’re pretty darn good (and HUGE) when local and in season.

My afternoon off on Tuesday also provided ample time to try out a new recipe:

This is a vegan sloppy joe recipe using lentils instead of meat. I got it here from the Post Punk Kitchen (my favourite vegan site!) but it actually comes from the book Veganomicon.

Instead of eating it sloppy joe style on a bun, I ate it on my favourite form of carbohydrate: pita bread.

The reviews of the recipe said it was a little spicy, so instead of 1 tbsp of chili powder I used 2 tsp chili powder + 1 tsp cumin. But I found it more sweet from the maple syrup! Decent recipe though. Super filling from the lentils.

As a random side note, my muscles are adjusting nicely to my new weightlifting split. Except one thing: my hands are killing me! Apparently my grip strength hasn’t increased with the rest of my strength. Even though my back can pull around heavy dumbbells, my hands are buckling under the weight! It hurts to even hold a pen :( Le sigh. Am doing lots of stretches and hope they will toughen up.

Now I’m off to bed. Away working from 6am to 10 pm again tomorrow! Gah!

**Thursday is your last day to vote for The Next Food Blog Star on Foodbuzz. Click here to read and vote for my submission if you haven’t gotten around to it yet. Thank you!!**

Question of the Day: Let’s talk carbs. What’s your favourite kind of carbohydrate? Mine are apples and pita bread, obviously ;)