A Challenge of Silence

Last night after hitting publish on my last post, I shuffled into my sister’s kitchen to whip up one of my favourite night-time protein snacks. 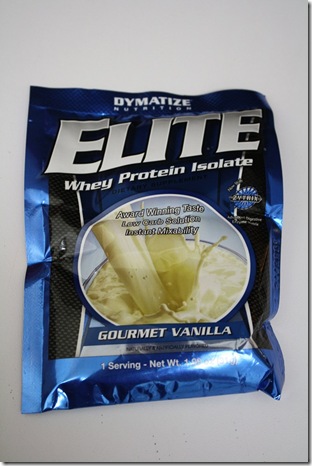 Nothing fancy going on here – just the powder mixed with a little bit of cinnamon, coconut, and enough milk to dissolve into a thick batter. 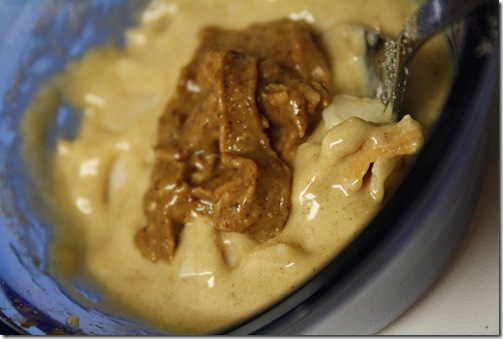 Topped with almond butter, of course ;)

I was quite excited to have protein desserts back in my life, but this powder just did not do it for me. Perhaps it would be decent in a shake, but if I don’t like it straight up, chances are I won’t bother trying to mask its flavour in something else. 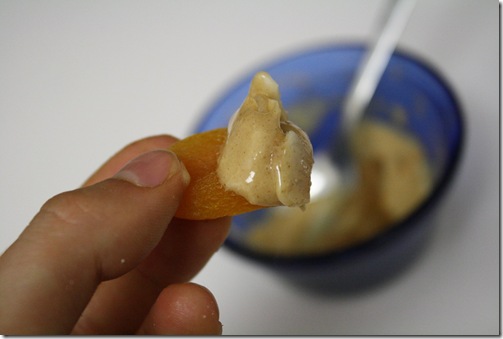 That includes dipping dried apricots in it ;)

I was in bed early last night in anticipation of my sister’s 6:30am alarm. You see, she’s out of town this weekend, but forgot to turn the alarm off on her blackberry. I don’t know the code to get on and change it! At least it’s had me up and being productive these past few mornings…

A “light” breakfast, although still calorie dense. Two servings of Liberte Mediterranee strawberry yogurt with a banana and a dash of granola for good luck.

Dare I say it?? Mediterranee yogurt is quite possibly better than Greek yogurt!! It’s true. Its thickness doesn’t come from straining, and it’s not high in protein. But mygosh, that 7% milkfat makes for the best taste and texture.

The light-er breakfast was in preparation for two things! First:

My first ever Yin Yoga class!! I’ve done Yin Yoga postures at home before, but never in a classroom environment. I’m not one of those people who does yoga for a workout, I do it more for that whole mind-body thang. So the idea of holding poses for up to 5 minutes at a time really appeals to me.

Funnily enough, for the first time ever – I fell asleep in yoga!! I’ve never been one to just doze off in Savasana. My mind is always racing by the end of class (usually about what I want to eat when I get home). But today, I was dozing off the whole time. I even fell asleep doing half frog pose:

I don’t know if I should blame this on my sister’s 6:30am alarm, or that maybe for once I was finally calm enough to let myself go… We’ll see I guess, I got a two-week pass at that studio for only 25 bucks ;)

Ohyes, and the other reason for the light-ish breakfast??

A bloggie meet-up for brunch!

One reason why I love blogging is that I feel like I have an extended friend network all over the world. Wherever I go, there is always a kind, smart and funny blogger to get to know in person!

Today, I met up with Darryn of Brio Gusto fame and her friend who is a fellow Maritimer :) Darryn is only in Ottawa for a little bit longer before she heads back to Vancouver to do her PhD. Darryn also just returned from a 7-week stay in India for a yoga teacher training course. Amazing. Check out her blog for all her recaps on it!

Funnily enough, Darryn chose this little pub called The Manx for brunch. My sister showed it to me the other day saying it’s got the best food on Elgin Street, and is therefore always packed.

But we got a table!

Note: this is not the full brunch menu. I believe there was also a “bruncher” and “brunchist?”

That would be the Eggs Zucchini: two poached eggs with grilled zucchini and spinach-feta pesto sauce on an english muffin.

It came with smashed potatoes! I call them “smashed” because they weren’t whipped and still had skins, my favourite way to have them. The best part however, was the spinach-feta pesto on top. I need to make this for myself!

After the wonderful brunch, I went shopping. And not the clothing kind.

Is it strange that I’m mildly excited to not have a car anymore? 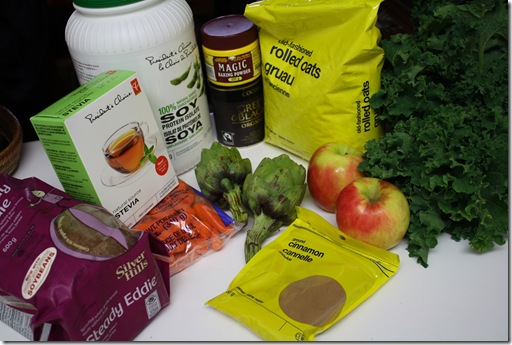 Perhaps I’ll spend less on groceries now that I have to walk home with them. P.S. If anyone has a recipe I absolutelymust try with those artichokes, do share.

It feels like ages since I last baked (11 days maybe?) so I picked up a few choice ingredients to turn my sister’s black bananas into high-protein goodies.

This is where I would usually google “protein banana bread” or the likes, but I was feeling reckless. 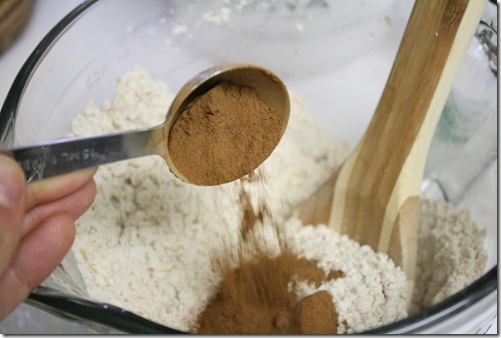 I mean, maybe this baking thing isn’t so hard afterall?? The recipes do start to all look the same after a while…

Here’s what I came up with:

1/4 cup walnuts, 2 tbsp shredded coconut and 1 tbsp maple syrup. Spread on top and broiled for just a couple of minutes to make crunchy.

It smelled divine coming out of the oven, and dare I say… edible??

I cut them into 12 little triangles for no reason other than it made for a fun serving size.

These are definitely good, or else I wouldn’t have shared the recipe. But you want to know the funny thing about baking?? A quarter cup of butter would have made these fantastic ;)

In other news, I’m making up for lost time on my greens.

I barely had a serving a day while in Alberta last week. Not only have I not eaten meat since arriving in Ottawa, but I’ve been loading my belly with fruits and veg. 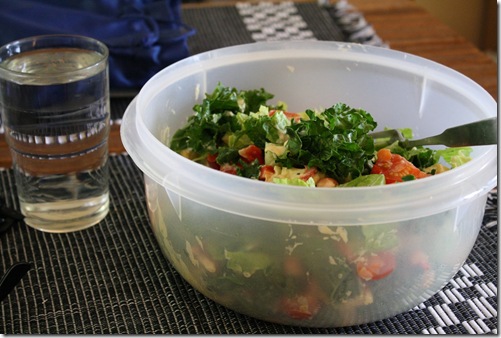 It’s not a guilt thing. I just give the bod what it wants :)

A Challenge of Silence

Okay, so this is more of a challenge for myself, but I encourage anyone else out there to participate!!

So, I’m reading the book Eat, Pray, Love. I bought it in Banff for some airplane fodder based on Holly’s high praises. For those of you who aren’t familiar with it, it’s the true chronicles of a recently divorced 30-something who went to Italy to experience decadence, India to experience devotion, and Indonesia to find a balance between the two. I’m at the India part.

Last night I read the chapter on the author’s experience with meditation and how she learned to quiet her mind, or “ego.” Then today in yoga, our instructor was talking about the same thing. Then I fell asleep.

Ellie mentioned meditation to me today, and I responded that I wanted to try it. She asked, “What’s stopping you?”

So this is a roundabout way of saying I am committing to A Challenge of Silence. Starting tomorrow (Monday) I will take 20 minutes out of my day to sit or lay still and meditate. Twenty minutes can either be a short period of time for some, or an eternity to others. I’m going to attempt to do it each morning as soon as I wake up. I want to quiet my racing mind and inner ego while learning to listen and feel my body. It may sound new-age hippy-dippy, but nothing is too silly if it means good health and happiness.

I don’t really have a set period of time for this. Ideally, it will be something I find beneficial and practice indefinitely. But for now, in the sake of “challenges” I’ll settle for every day for 30 days ;) I’ll update you on any progress or revelations along the way!!

Last but most certainly not least, Happy Fathers Day!!! 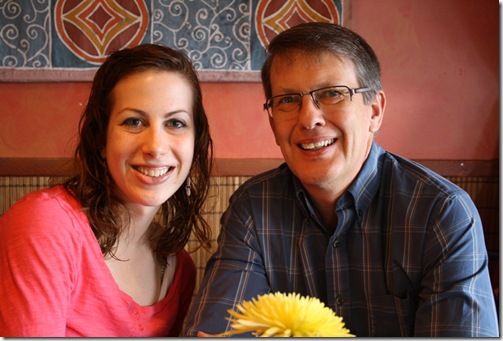 My dad doesn’t read my blog. I’m pretty certain he only uses the internet to stream the Tour de France when it’s on. But I love the old man just the same ;)