Whyyyy is the weekend over already?? It went by so quickly! I only have two weeks left at my job. Then I’m on my own till I head to Toronto! I actually plan on moving back home for a few weeks before heading to TO for June 1st. And yes anyone living in the area – there will be tons of bloggie meet-ups in our future!

But there I am getting ahead of myself again. It’s Sunday. The end of Sunday. Sigh.

My body didn’t get the memo about it being the weekend again. 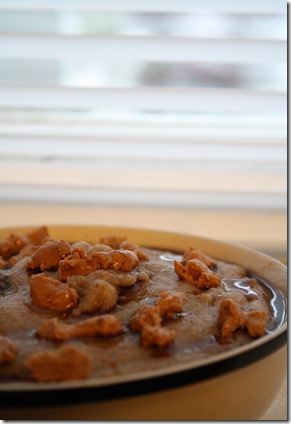 Was up in the 6 o’clock hour again and stumbled to my stovetop right away to get started on a batch of cream of wheat. 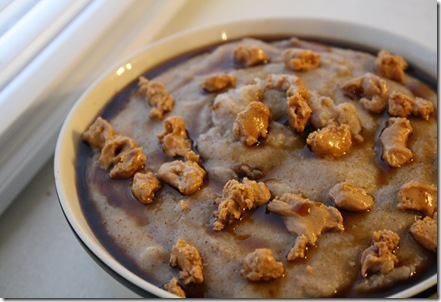 Cooked with unflavoured soy protein powder and dates. Topped with cashew butter and molasses. End of the jar for the cashew butter, and it’s almost solid! That’s why it’s all broken up like that.

I was sooo not feeling the gym today, I just wanted to lay in bed reading all morning. But I forced myself out to a step class. As a little background, I usually go to step at the small women’s-only location. It’s the only time I ever go to that gym, but I just got into the habit of going there any time I went to step. It’s a small class of 25 women or so and pretty tight-knit.

Well, today I went to my usual, much larger, co-ed gym. There were at least 50 women packed into the class and two instructors I’d never had before. I was a little nervous, because step is one of those things that you need to get into a groove with. I didn’t want this new environment throwing me off my game!

Well, can I just say, it was the best step class I’ve ever been to. Ever. For a person who hates being in crowded environments, I love being in jam-packed exercise classes. I think it’s because I can blend in a little more. Plus, I feed off the energy of others, and today’s class was flying!

The instructors were hilarious and entertaining. I pushed hard because I was having a great time – my HR maxing out at 174 bpm, which only ever happens when I run! Between step today and kickboxing yesterday, it’s been a fun weekend of exercise for me :)

Like I usually do after hard workouts, I was craving eggs. 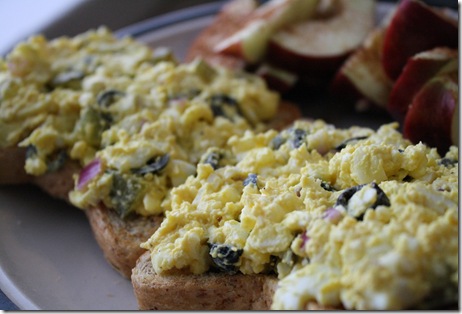 I wasn’t full after this, but then I wasn’t hungry for a very long time. Weird.

Showed my apartment again – I may have found a subletter! Maybe. She’s signing a sublet agreement tomorrow. But I won’t believe it until she actually moves in.

After grocery shopping, I realized that I had three cartons of egg whites in my fridge. Whoops. It’s one of those things I automatically buy every week. Apparently, I didn’t eat much last week. 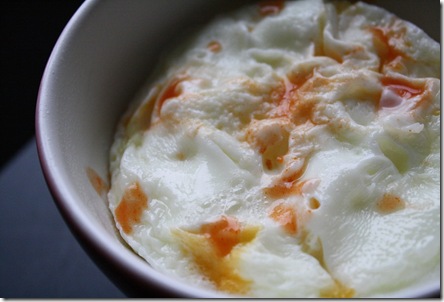 For a snack, I poured egg whites into a mug, and added a de-strung (??) string cheese, nuking it for 3 minutes. Topped with Frank’s hot sauce.

The cheese is key. Then you get little pockets of melty heaven.

So, a girl at work is celebrating her birthday tomorrow, and it’s Treat Monday. Clearly, this called for something extra amazing!!!

Word on the street is that Janetha’s fruit pizza is the bestest, and I’ve been drooling over it forever. It calls for two rolls of premade cookie dough rolled out onto a baking sheet and baked. Then topped with a mix of whipped cream cheese/condensed milk/vanilla extract and fresh fruit.

Except! My grocery store only had chocolate chip cookie dough! I panicked, and bought cinnamon rolls. 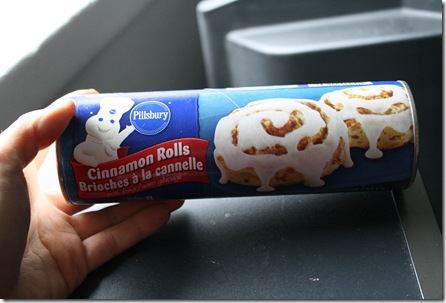 I started imagining a fluffy cinnamon-y crust, but realised this may not be the case when I popped it open and the rolls were already cut up. Could we get any lazier??

So I squished up all the dough and rolled it out with a water glass because I don’t own a rolling pin.

And then I baked it! Predictably, the dough in the center didn’t cook while the edges browned. But it came apart pretty easily and I was able to get a few mini pizzas.

I bought a container of fruit salad for the toppings. It’s got pineapple in it though, so I may not be able to partake tomorrow as I’m allergic (even to the juices). But I did by a melon salad, and tried a little pineapple-free piece tonight.

I gotta test the goods!! It was deeelicious. The “sauce” is the best part. Maybe next time I’ll just make my own cookie dough or something ;)

Dinner was another blogger inspired recipe. This time from Leah! I wanted leftovers for the week, and she’s my go-to gal for those ;) 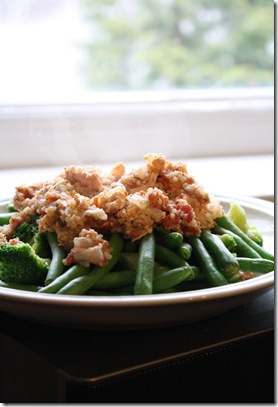 I served it on top of some steamed green beans and broccoli. I’ve actually made this once before and loved it. Definitely deserved a make-again! It’s really quick and easy too. 20 minutes, minimal chopping, and all you have to do is throw a few things in a pot.

Oh, and look at who I ran into while waiting in line at the grocery store today!! 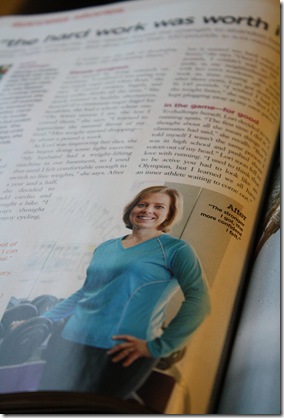 Lori!!!! Eeeeee!!!! So. Freakin. Exciting. She’s featured as one of the real-life weight loss stories in May’s Shape magazine. She looks fabbity fab in the photo too. Stellar wardrobe choice Lori! I love that you’re picking up a big-girl’s dumbbell in the shot too ;)

Oh, and remember this shot of Archie I shared yesterday?

Well, I didn’t share the one of him winking at the camera.

Sorry ladies, he plays for the other team, if you catch my drift *wink*

And for the record, my mom is never getting him back :P

Now I think I’ll wrap up this blogger-inspired day by making one of Holly’s no bake protein cookies. See ya tomorrow!!

Questing of the Day: What blogger-inspired foods have you been eating lately?