Hellooo friends!! Did many of you have to work today? I didn’t, I’m on a four-day weekend, and I’m honestly excited to go back to work! How weird is that? I don’t think I’ve ever had a job I liked that much before :P

Even after four days, my body clock is still set on early. It’s at least nice to be able to eat in bed and not at my office desk :)

Today’s breakfast was cream of oats cooked with soy protein powder, benefibre and cinnamon. It cooked up so quick on the stove! Five minutes flat.

Topped with blueberry jam and peanut butter. Cream of wheat isn’t quite the nutritional powerhouse of oats, but it is notably high in iron. I know some ladies need to keep on top of their iron levels ;)

I took the day off exercise after yesterday’s two-hour extravaganza. The only part of me that’s sore is my chest after doing 5 minutes of chest presses. I noticed I only had one serving of coffee grinds left, so I decided to skip it today since I wouldn’t be working out anyways. I’ve been in a fog all day! Not to mention, suffering from a dull headache. I drink one french press a day, and I hadn’t realized I’d become so dependent on it. Boo. I’m not giving it up though, blasphemy! :P

I spent the morning cleaning and watching the last of the Real World DC. Broke for an early lunch because my hunger is always out. of. control. on rest days. 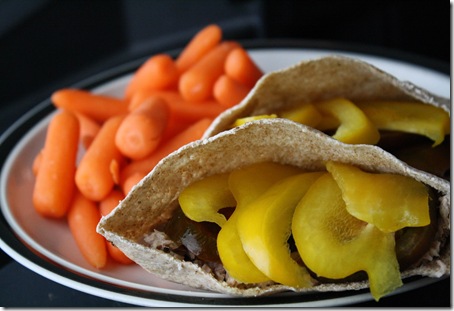 Tuna + baba ganouj pita with yellow bell pepper and tomatoes. Carrots in the back. T’was colourful :)

After everything was clean, I got into the kitchen to mess it up again. Started with some treats for Treat Monday Tuesday at work!

I made a batch of homemade turtle pretzels that I first made over the holidays. This time I was able to find waffle pretzels, and I used mini Rolos instead of the giant caramel cups I used before. Oddly, I can’t find regular sized Rolos anywhere.

Anyways, stuck the Rolos on top of the pretzels and put them in a 250 F oven for about 5 minutes – just enough to soften up the chocolate. Then I pressed a pecan half on top of each one and let cool. 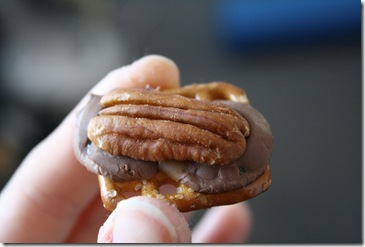 These were a hit over Christmas, so I knew they deserved a re-make for the office.

Not to mention, they’re a little on the lower-calorie side compared to the cookies and squares I’ve been bringing in. A nice post-Easter indulgence ;)

Afterwards, I got adventurous and tried out a new homemade protein bar recipe. These aren’t perfected yet, but I’ll share anyways in case you want to build upon it to make it better. My goal was to have a dense and crumbly baked bar. 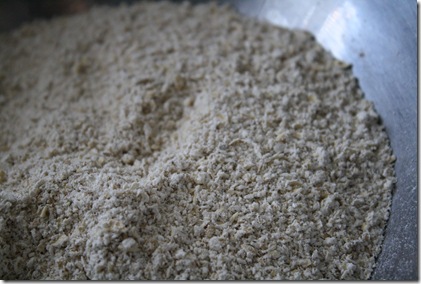 Started with 2 cups oat flour, which I made by blending oatmeal in my food processor.

And flattened into a square baking pan… 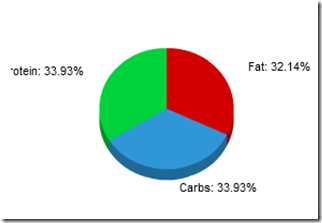 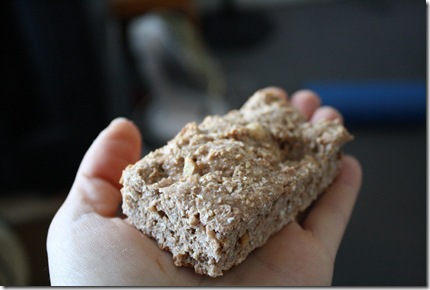 Like I said, needs work. I don’t like the “squeaky” texture whey gets when it’s baked, even though I thought I was going to avoid it here. And oddly, they’re a little more bland than the unbaked variety, even though it’s the same exact ingredients. Still edible though, and will make for easier transportation :)

Supper was a four ingredient dinner. No ham today!! 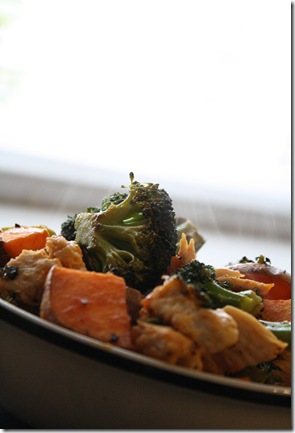 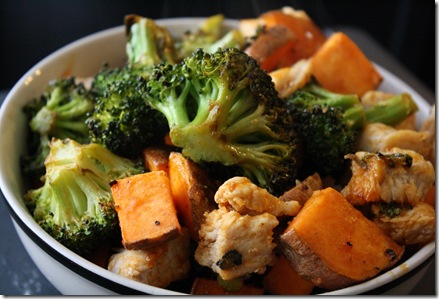 Tossed together and baked. I’m loving these minimal ingredient dinners! So simple and tasty :) I like being able to taste every ingredient…

Ohyes, and there was a lot more studying today… 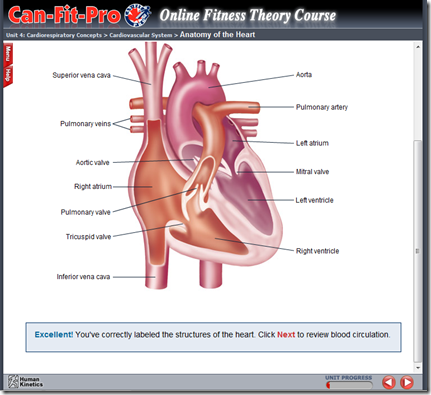 I can name the main structures of the heart! Yayyy! Exam is April 17, and I still feel like I have a lot to get through. I also fell asleep while studying today. I never just randomly fall asleep like that! I conked out for a solid 30 minutes, only to wake up with my laptop still on my tummy and my glasses on. That’s what happens when I skip my coffee!!

Question of the Day: Are you a coffee person? Do you rely on caffeine? I drink two big cups, or a french press’ worth, of coffee a day. All before 10am, any later and it effects my sleep at night. I drink one of those cups before I work out in the morning and it makes a world of difference in my workout. I never thought I was dependent on it, but I guess I am. I better sleep well tonight!