I had a blast reading through the comments on my Outrageous Lies post! It was fun to see what y’all think I’ve done – and many of you guessed right! As a refresher, I listed 5 outrageous lies and one truth, and you had to guess the truth. Here’s what I listed:

1. I read 36 books one summer in elementary school.
2. I won the highland dancing provincials when I was 6 years old.
3. I’ve been to Sidney Crosby’s house in Halifax although he wasn’t home at the time.
4. The fastest mile I ever ran was done in 7 minutes and 14 seconds.
5. I once made a vanilla latte for Jack White of the White Stripes.
6. When I was a reporter, I did a live television hit for Canada’s national news network, CBC Newsworld.

So the answer?? Number 5!!! I did indeed make a vanilla latte for Jack White of the White Stripes once. Actually, it was a triple grande sugar-free vanilla nonfat latte. For any newer readers, I worked at Starbucks for about five years on and off. A couple years ago, I was helping out the Starbucks in Moncton for a weekend while I was in town for a White Stripes concert. Wouldn’t ya know Mr. White himself and his manager walked in wearing black and red suits! They stuck out like sore thumbs in our small-city Starbucks :P I’ve made coffee for a lot of well-known people over the years, but he was definitely the biggest! The concert that night was awesome too ;)

And in case you were wondering, the rest of the outrageous things aren’t that outrageous, because I purposely made them feasible.

1) My record for books read in one summer is 24
2) I did highland dancing as a kid but never won competitions
3) I’ve never been to the house, but I know the person who owned it previously
4) My fastest mile is closer to 8 minutes
6) I’ve done live television hits but never for the CBC.

Okay, on to things that actually happened ;)

I had a tough treadmill session today. I think I actually pushed myself a touch too hard. But I guess I’m never going to get better unless I test my limits!

In case that’s hard to read, I essentially increased my speed by 0.1 mph every minute for five minutes, then I would go back down a little and start the increase again. I also did this on 1.5% incline, slightly higher than the 1% I’m used to. I don’t know if it was the speeds, incline or just me today, but it wore me out. Definitely feel like I over-exerted myself :(

I brought something different to work for breakfast today:

Cream of wheat! Mixed with 1/2 scoop vanilla protein powder, cinnamon and raisins. The room with the microwave was locked again, so I had to sneak upstairs to my boss’ office to use his. And of course, it exploded!

Gah. There is nothing worse when you’re starving from a workout and breakfast turns into a disaster. I had to scrape the cream of wheat off the rotating plate into my mug :P No way I was losing that amount of food!! I think I need to try it stove-top before I come to a solid opinion on it, so far it tastes like oat bran. But I like that it’s high in iron.

Work was busybusy! I almost fainted in a meeting because I was in a calorie deficit for too long. I hadn’t yet consumed the calories I burned running this morning. Not cool. My body does not like that. I attacked a fruit tray after and the sugar immediately made me feel better.

Now, you’re probably wondering where my morning waffle is. I mean, it is Waffle Wednesday after all. But who says waffles are just for the morning??

After such a long and tiring day, I was definitely looking forward to this for dinner… 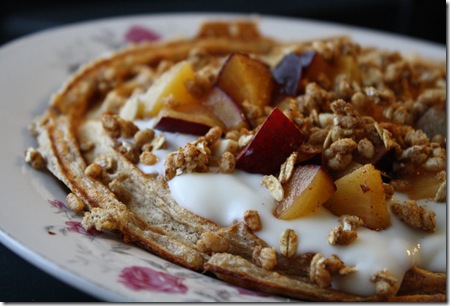 Definitely worth waiting for!!! Hands down one of my best waffles yet. I was feeling “off” all day from my run, and finally felt right again after eating this.

I also have some recipe attempts to share today!

Nancy tried out one of my faves, butternut squash fries in this post.

I know a lot of you are sweet potato fry lovers, but I think butternut squash fries trump all varieties for me!

And Jennifer tried out a batch of my Apple Cinnamon Protein Bars.

Except she gussied hers up with almonds on the top. An idea I will have to steal for my next batch ;)

If you have a recipe you’ve tried that you want featured, send it my way! If you’re a blogger, send me the link to your post. For you non-bloggers, It will give you  an excuse to finally take pictures of your food. My e-mail is: thegreatbalancingact@gmail.com  Let me know if you’ve got any tips or tricks to include as well, different methods work for different people!

Well, I wanted to include a lot more in my post tonight, but today is just one of those days where time is not on my side. I just got back from a friend’s place where I spent my evening making faces at a 10-week old baby. I got to hear his first laughs!!

How bout some questions?

1. One outrageous truth about yourself? I’m pretty boring, but people usually get a kick out of the fact that I used to sing/play guitar in an all-girl punk band.

3. Your one go-to recipe. I’ve made this Southwestern Quinoa and Chickpea salad a million times and it’s always delicious.