Waffle Wednesday – An Ode to Waffles

Happy Waffle Wednesday!! As I was sitting at my desk today, trying not to doze off as I do everyday at 3pm, a thought struck me. Waffles are the best thing about Wednesday! No longer a “hump day,” but one I look forward to every week. On top of that, I’ve eaten and taken pictures of a lot waffles. So I present you with a special Waffle Wednesday post – An Ode to Waffles.

My obsession with waffles began on February 17, 2009. My roommate and I were were having one of our frequent discussions about food. She let it slip that she actually had a small waffle maker in the apartment. The next morning, I dug it out, made a ginormous batch, and fell in love. 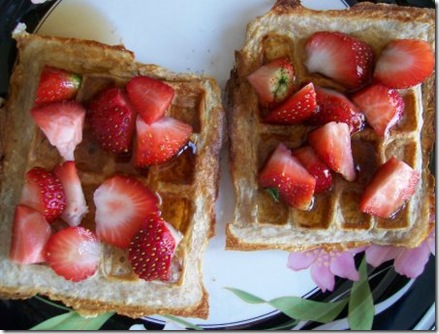 I used my usual protein pancake recipe for the waffles, and always have since:

Making six small waffles in my roommie’s press was time consuming though. So I started to venture out and buy frozen waffles. Namely – Nature’s Path maple cinnamon waffles.

I found that while freezer waffles are flimsy on their own, they could be quite filling when paired with fat and protein. So nut butter, syrup and egg whites often accompanied them.

Of course, they made for a pretty good snack too ;)

With the summer months, came an abundance of fresh berries. For a time my favourite toppings were almond butter + yogurt + strawberries.

Okay, so I went a little nuts with the berries… 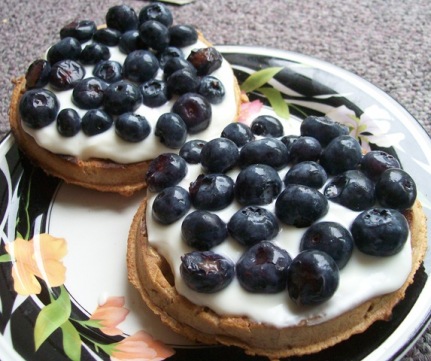 Sometimes the combo changed a little. Mixing the berries with the yogurt… 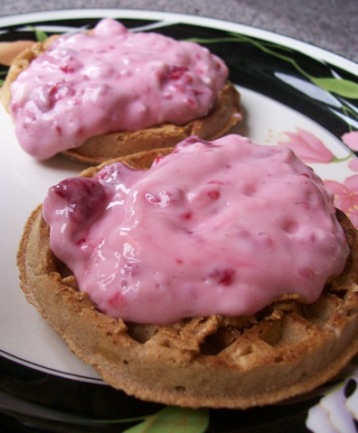 Drizzling the nut butter on top with syrup…

Or even putting the egg whites on top with syrup.

I did sometimes expand outside the realm of berries to other summer produce. Peach season made for some tasty breakfasts!

The end of summer came with a new apartment – and new kitchen appliances. The roommie’s dinky waffle maker was replaced by a beastly belgian waffle iron.

This bad boy brought my waffles to a whole new level. Of course, my first venture with it included my coveted berries.

And yogurt (in the shape of Mickey Mouse). 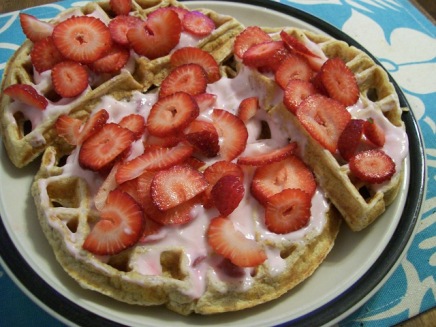 Sometime the blueberries went in the waffles.

And sometimes I had them plain, dipped in a nut butter syrup. 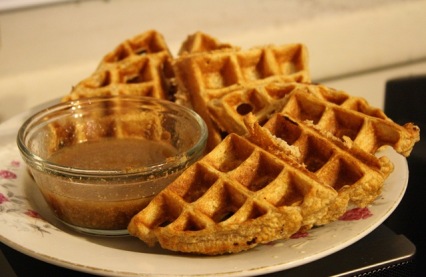 But sometimes a girl still lusts after a good freezer waffle. As the price of berries went up, and the taste quality went down, I had to find new ways to fancy up my waffles. There was an obsession with all things PB&J for a while… 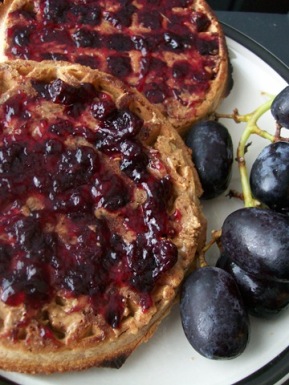 The discovery that blending cashew butter + ricotta + maple syrup + cinnamon made a delicious topping that got in both my fat and protein.

Sometimes I ventured away from the sweet combinations and tried things like turkey, eggs and cheese. 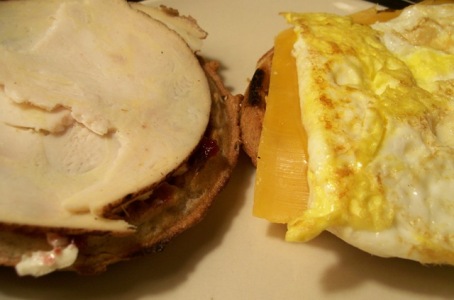 But my best creation yet has been french toast waffles. 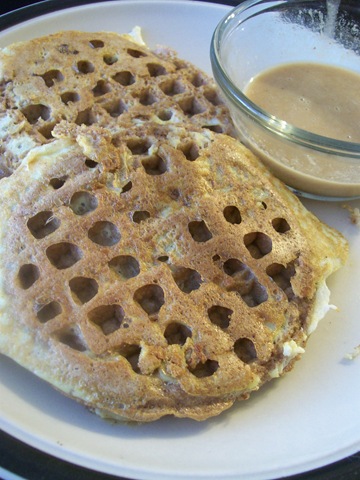 Made by dredging thawed freezer waffles in egg whites.

And lets not forget, plenty of flat waffles were had ;)

So what was today’s waffle? Protein belgian waffle with almond butter and jam!

I didn’t need a big breakfast today, and it had to be quick. So I cut the usual protein waffle recipe down to 1/3 cup for everything. I had to eat it on the run but it was SO good!!!

I also had another awesome living room workout this morning thanks to my bike trainer and Levels 1 & 3 of Jillian Michael’s 30 Day Shred. I’d love to stick around and chat – but I’ve got a bowling date with the gals from work!! Hope you had a great Waffle Wednesday too!

Question of the Day: What’s your favourite way to eat waffles?