LOVED reading all the jobs you guys have held. There were some good ones:

I don’t know why, but I get a kick out of hearing about other people’s random jobs :P

I get a big FAIL for sleep last night. 6-ish hours. I’m usually up several times throughout the night, but last night was bad. Starting at 5am I was waking up every 15 minutes! Boo.

Thankfully, I had some steel cut oats soaking in the fridge. Lori posted a quick cooking method for steel cut oats yesterday. All you have to do is soak the dry oats in the water overnight first, then they’re supposed to cook up much quicker in the pot the next day.

Unfortunately, this did not work for me. Maybe it’s the oats I have? I let them cook on the stove for almost 20 minutes until I couldn’t wait any longer. At least I had the perfect dish to eat them out of :)

I mushed up half a banana in there too because my serving of oats looked so small. There actually wasn’t much almond butter left in the jar. I have a hard time saving a tablespoon’s worth for the morning!

Today is my day off, so I spent the morning in bed watching the Today Show and getting lost in the vastness that is the World Wide Web. My sweet tooth (and belly) kicked in during Regis and Kelly. 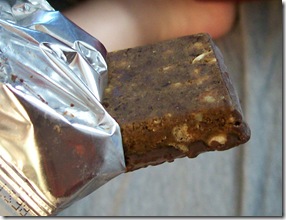 I enjoy the crumbly (yet sturdy) texture of the bar and the chocolate on the bottom. The ingredients are pretty darn good too, you can check them out here.

Then the cleaning madness began, and I breaked for a delicious lunch during The View.

Dare I say egg salad is my favourite kind of sandwich? I’m especially a sucker for the little triangle egg sandwiches at church functions. But nothing beats my Nana’s ;)

I was going to take the day off exercise and just clean today, then yoga tonight. But the sun was shining, and we surpassed our predicted daytime high. The weather was just taunting me to go outside and run! I succumbed. It’s going to start snowing soon, and I probably won’t be able to run outdoors anymore. It’s illegal to run on the roads here (I’m in a very busy spot) and the sidewalks are dangerously icy!

Anyways, I kept it short, doing 5k in 28 minutes. I’m pretty happy with this! I haven’t run just 5k in a while, I’ve been doing a lot of looong and sloooow runs. It was nice to see I’ve been able to maintain a little of the speed I gained in late summer :)

I also whittled my middle when I got home. I’ve been getting quite dizzy lately when I do regular planks. I think it’s from being horizontal with my head down. But it’s concerning enough that I’ve cut it short the past few times. Does this ever happen to anyone else? I’ve been known to faint in the past (although, never when working out) so I get concerned when I start getting so dizzy I’m blurry-eyed.

Also odd, is that running short and fast distances always suppresses my hunger. But I always like to get a little somethin’ in me after a workout, so I snacked on some pumpkin spice roasted chickpeas while I iced. 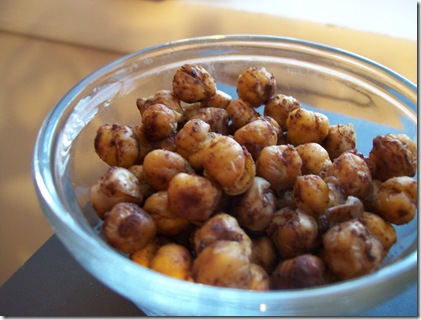 Unfortunately I did not get back to my cleaning after the run. I knew that would happen! I did however make a wonderful dinner, so that’s something ;)

Shrimp “alfredo.” It’s whole wheat spaghettini, shrimp, broccoli and cauliflower. The sauce is two laughing cow cheese wedges thinned with a liiiittle bit of plain yogurt with some parmesan, pepper, onion powder and teeny pinch nutmeg. Heated in the microwave to melt slightly before tossing it with everything else.

I was really craving shrimp pasta for some reason! Which is weird because I don’t usually care for noodles, and that shrimp has been in my freezer for-ever. It was delicious though, everything I wanted and more ;)

But no meal is complete without a little chocolate.

I nibble away at it so it takes me almost five minutes to eat one piece. Mmmm…

Despite my short run, I really didn’t want to bail on yoga class tonight. I was looking forward to it! One thing I don’t appreciate about the Les Mills classes, is that it’s the same for several weeks at a time. Same songs, same moves. Gets dull after the first three times. But our instructor switched it up a little so it was fun. Hips are appropriately open, hamstrings are adequately stretched :)

Well, that’s just about everything I ate today! There was a handful of soy nuts and a few chocolate chips with my morning coffee, but that about sums it up :) Rare that I ever actually do that. I am about to go make a snack of pita bread and tofu spread so it’s not exactly everything. But you get the gist ;)

Questions of the Day:

1. What’s your favourite kind of sandwich? Egg salad here! My Nana also makes these asparagus sandwiches that are deee-licious. I think they’re just canned asparagus (mushiness is optimal) rolled up in bread with margarine and cream cheese.

2. What’s the best thing you ate today? Mine was dinner! But who knows, the snack I’m about to have could knock it out of its place ;)

Now I’m off to go log my day’s calories. I haven’t done it since breakfast and it’s going to take soooo long. This tracking thing is getting old pretty quick! But I want to have a week’s worth of numbers before I stop, and it’s only been five days.