Happy weekend everyone!! Hope you’re all having a blast out there in blogland. Not gonna lie, weekends are probably my least favourite time of the week because of my work hours (5am to 1pm). But I’m doing what I can to pull through these next five weekends at my job. 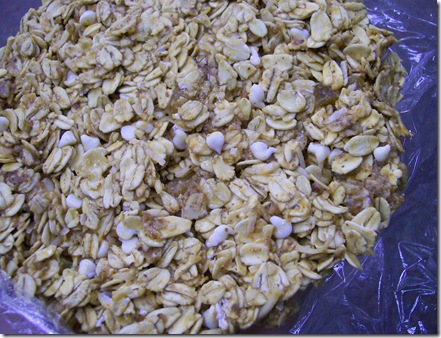 This was pretty good! Surprisingly, quite tart compared to my usual cookies (which are admittedly waaaay decadent). I think the yogurt chips were my favourite part ;)

I also celebrated Sammie Saturday with a turkey and hummus sandwich at work. 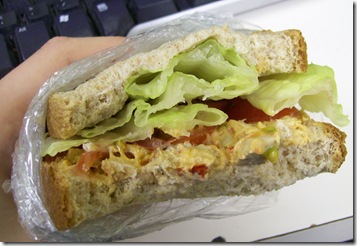 I only had a bit of roast turkey left, so it was mostly red pepper hummus. SO good!

A lot you also expressed interest in the tofu spread from the Costco haul. 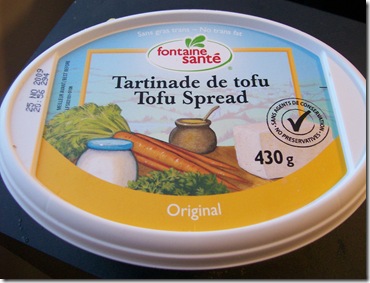 I just assumed it was one of those awesome products that only Costco carries, but apparently the company, Fontaine Santé, is a Quebec company. So that may explain why it’s not in some stores outside of Canada. They also make a mean hummus, tabouli and couscous salad.

I don’t think I’ve had this stuff since high school. I’ve been trying to recreate it ever since! 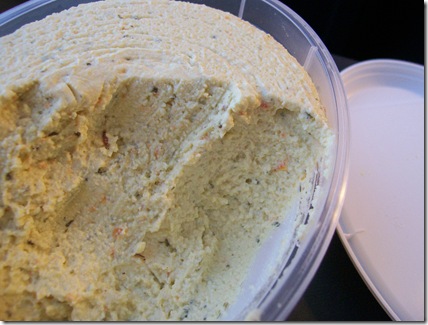 Now I have my hands on the ingredients ;) 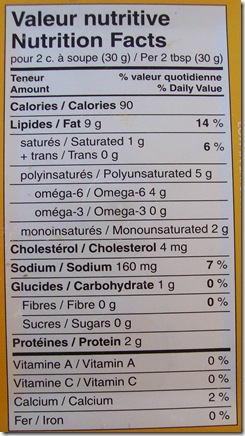 I’ve been munching on it with pita bread and wasa crackers. 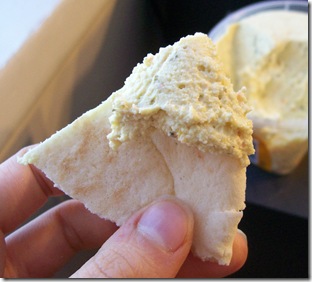 Must resume attempts at recreating this when current stash runs out…

I surprisingly have a lot of energy today after little sleep last night. I knew as soon as I got off work that today was a running kind of day :) Despite the bright sunshine and clear blue skies, it was pretty chilly. +3 Celsius, or, 37 Fahrenheit (ugh, I will never learn how to spell that word, spell check gets it every time).

I ran in this temperature once before and recall my ears and hands being chilly, so I tried to dress accordingly this afternoon.

A tuque for the for the noggin and some dollar store gloves. Also had a turtleneck technical shirt from the Running Room and some cheap-o spandex capris I bought on sale at the grocery store. Oh yes, and the mandatory paper towel to wipe my snot faucet nose every 2 minutes.

The shirt was perfect, but my shins/ankles were a little cold. It was fine once I got going, but I think it’s time I invest in some long running pants. The gloves came off towards the end, and the tuque kept my ears warm, but had the rest of my head sweating. Must add headband to that gear list :)

I ended up doing 4.3 miles in 40 minutes along my favourite trail. It was a good time, I tried to pick my pace up a bit, and hit 179 bpm during my sprint to the end (so close to 180!). Four miles is one of my favourite distances, short, but I never feel gypped :)

Came home and filled my belly with a post-workout smoothie. 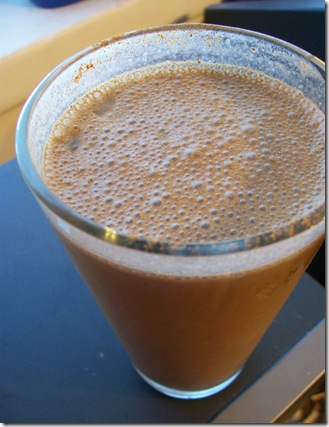 I’m all out of bananas, so I thought the dates would make up for the missing sweetness that I love. But what really made this smoothie was the cinnamon! The cinnamon tasted especially delicious blended with that “earthy” flavour of the Amazing Grass. I love spicy chocolate too, so it was a winning combo for me.

My afternoon was spent catching up on this week’s TV I missed and doing Yin Yoga in my living room. I’m not much of an at-home “flow-er,” I like having an instructor to guide me. But I looooove sitting in a handful of Yin poses for a half hour. Check out a pose guide here :)

For dinner, all I wanted was a big ole’ bowl of warm, comforting soup. So I reached into the depths of my cupboard and pulled out this: 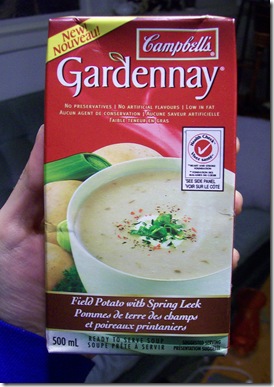 Campbell’s Gardennay Field Potato with Spring Leek. It expired a week and a half ago, I like to live dangerously ;)

I had about 3/4 of the box plumped up with crumbled tofu, frozen broccoli and cauliflower. 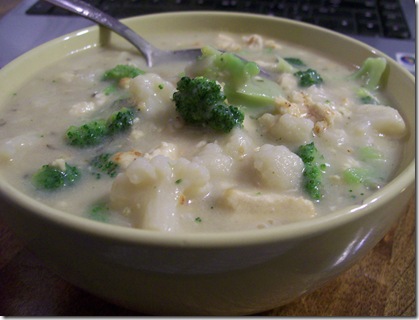 It was still missing something. I wanted a little cheesy flavour, so I ventured back into the depths of my cupboards and found my nutritional yeast flakes. 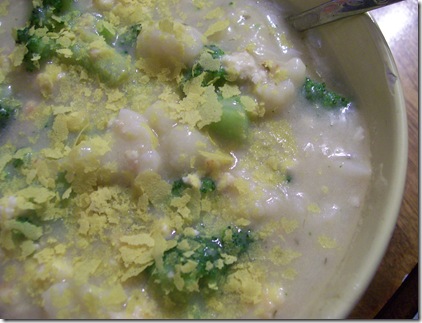 Muuuuch better. It was quite good with the nutritional yeast!

Now I’m thinking of cleaning the kitchen and making tomorrow’s breakfast cookie. Going to be a quiet weekend all around. What I’m reeeeeally looking forward to is a special 75 minutes spin class at my gym tomorrow afternoon. They only have classes in the mornings on weekends, so I always miss them. And the spin classes are usually only 60 minutes long. Can’t wait to get off work and spin it out with two of my favourite instructors :D

Questions of the day:

1) What’s your favourite soup? I don’t typically like drinking my calories, and that translates into soup. That’s why I always bulk them up to make them really chunky. I’m not sure if chili counts – but that would be my favourite!

See ya tomorrow for my November Goals check-in!