Hey friends! Well, today was less apple-filled, but “Apple Watch ‘09” continues. Ellie’s concerns of my turning into an apple may in fact be legitimate! :P

Before getting to my lovely breakfast, I was up at 5:30am to make it to a spin class before work. As always, it was awesome! Chugging a glass of iced coffee beforehand makes all the difference for me. Today we had a different instructor. An older guy who wasn’t quite as intense as the younger girls we usually have, but you could tell he was suuuuper nice. I pushed myself really hard just because he was so polite about it! :P

Okay, then I came home and re-heated the steel-cut oats I made before bed last night.

For a two serving batch I cooked:

The directions said to let simmer for 30 minutes, but it didn’t feel like that long at all. I measured out half of it this morning (can’t trust my post-spin judgement! :P ) and topped it with almond butter and Fluff watered down a little for optimal drizzling. 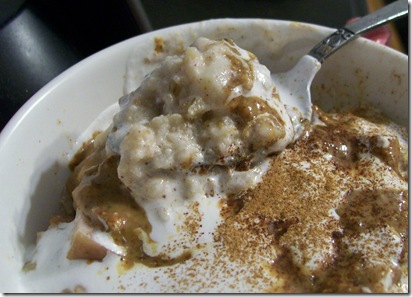 This bowl was epic. I actually meant to put applesauce on top too, but I got too excited and forgot! Good thing I still have another bowl’s worth in the fridge ;)

I had a cah-raaazy busy day at work today. Covered a trial all day long, and spent what should have been my lunch break chasing after protesters in the woods. Pita was eaten in the news car. 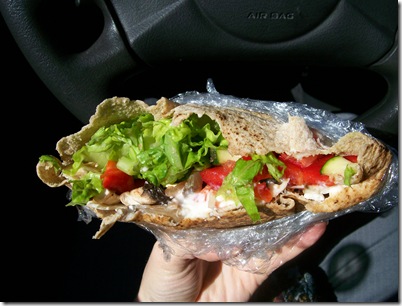 Deli chicken and cottage cheese with all the veggies I could find in my fridge.

Carrots to round it out…

Yeah, haven’t been taking pictures of my week-day work eats because it’s still always the same thing – pitas with veggies or fruit. This isn’t a rut either, I just love it!

Ended up working super late and got started on a tofu quesadilla the second I walked through the door. 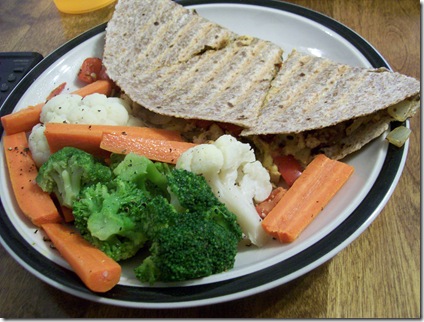 I crumbled the tofu up in a frying pan with some onion, red pepper and mushroom, dousing it in every spicy seasoning I have. Topped it with some quality jarred salsa (or, as quality as it gets anyways).

Now, you’re probably wondering why this post is called “Baconator” when I had tofu for supper. Well, the fabulous and adventurous Emily the Experimentarian sent me some bacon-flavoured goods she sampled on one of her Freaky Food Fridays. I love bacon. I love mints. Why not bacon mints!? 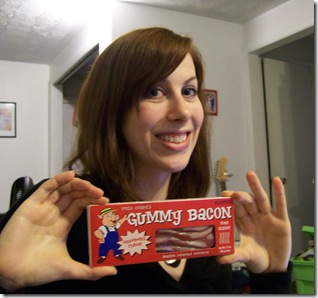 It almost had the texture of raw bacon.

Thankfully, it was strawberry flavoured. I actually really liked this stuff! It’s no secret I have a soft spot for candy and corn syrup. Even when it’s shaped like raw meat :P

I especially appreciated this warning…

The mints however, were much more interesting. They were actually smoky smelling like bacon. I had to call in back-up for this one.

Chris was scared, but he wouldn’t admit it :P

He said “Ew. Minty ew. I already had bacon once today.” 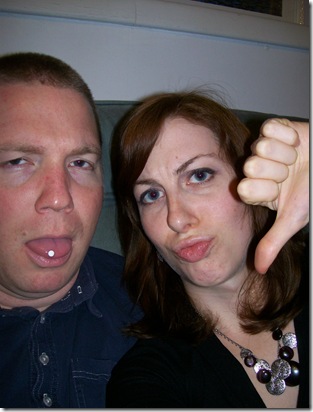 NO to bacon mints. YES to bacon-shaped strawberry flavoured gummy strips :P Thanks for the Monday night entertainment Emily!!!

Don’t forget! Tuesday is your last day to enter my giveaway! You’ve got till 5pm Eastern time (I figured most of you haven’t heard of Atlantic time, which by the way, is 6pm my time :) )

Question of the day: What’s your favourite candy? If we’re excluding chocolate here, my favourite is just plain ole’ suckers or Twizzlers.

Chris’ question of the day: Am I bacon you hungry?