The course was actually 3.2 miles and not 3.1, so that’s the time it took me to run the 5k distance. It took me just under a minute to run the rest.

My average pace was 8:40 min/mi. Not gonna lie, I thought my chest was going was going to explode out of my chest during my sprint to the finish line! :P My heart rate monitor went up to 190 bpm, but I’m not sure if I even believe that!

I don’t think I mentioned it, but today’s race was the annual Terry Fox Run. 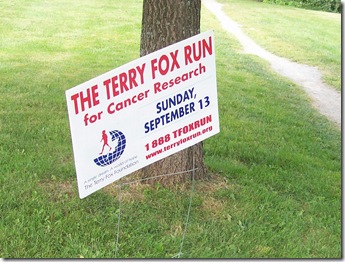 I’m not sure if Terry Fox is well known outside of Canada, but I would definitely call him one of our national heroes! After losing his leg to cancer, he set out to run across the country on a prosthetic leg to raise money for cancer research. He called it the “Marathon of Hope.” Unfortunately, he died in 1981 before he could finish, so now people across Canada run every year to sort of “continue the marathon.” One great thing about the race is that there’s no registration fee or required fundraising amount. Terry Fox’s whole thing was that he wanted to raise just one dollar from every Canadian.

Anyways, it’s got me kind of nervous for my 10k race next weekend! It made me realize that I have to remember to pace myself. I want to finish it in one hour, but I may tucker myself out if I get caught up in the excitement at the beginning. And I think I will take walk breaks if I feel so inclined. Seeing as they tend to speed up my pace! :P

Okay, enough babbling, I’ve got some food pics too :)

Day started off mega early with a breakfast cookie.

Hmm…looks like I had a smudge on the lens. Or my morning haze just translated into the photograph. Chris can take long videos on his camera, so I’m thinking of doing a breakfast cookie how-to when he’s home next!

I also tried out my Montreal smoked beef slices from the market.

On a pita with some laughing cow cheese, mustard, tomatoes, onions and romaine. Loved it!! I’m a total carnivore now.

I opted for a larger pre-race snack after I got off work, because it would be a couple hours until I actually started running.

Sliced banana with peanut butter and a couple dates with cashew butter. These are my no-fail foods before exercise. It never, ever upsets my tummy and gives me an excellent burst of energy.

While snacking, I worked on my 5k playlist.

This actually ran at 30 minutes. I like choosing songs with a beat that I can pace to. Keeps me going fast :) I also can’t stand exercising to boring songs. They’ve got to be quick and catchy!

I was a sweaty mess when I got home. It was way too hot to be running today. For me at least. Around 25 C with the sun beating down on us. So I rehydrated with my fave Vega smoothie.

I also foam rolled and iced, which I don’t always do for shorter runs, but I am definitely feeling the effort! My legs are stiff, and I feel a little woozy from the heat still.

Dinner was very purple. Well, it was supposed to be purple. I steamed some purple potatoes and purple “green” beans:

Except the beans turned green when I cooked them!

The potatoes stayed purple though ;) I had a grilled chicken breast stuffed with baba ghanoush on the side. It was delicious, I love fresh veggies steamed. In case you’re wondering, I also smothered them in parmesan cheese. Not the fancy kind, oh no. The processed Kraft kind. Yup! I love the stuff, and I’m not ashamed to admit it! April wrote a wonderful post on the pressure we sometimes feel to show perfect foods on our blogs all the time. Sure, I try to eat whole, unprocessed stuff as much as I can. But I love my fake syrup, Kraft parmesan and protein bars. I think balancing these things out with “real” foods is the key to a happy way of eating :) For me anyways.

Now I’m just doing some major couch sprawling. Going to get up soon and do some cleaning though! Gotta stretch out those legs! Hope you all had a great weekend!